7/09/2004 -- I think I got in over my head on this one...finally decided to remove the vinyl top. Called around and asked on the Maverick Message Board http://mmb.maverick.to/index.php regarding the best way to do this. Apparently, these cannot be recycled, as I hoped to give it to someone who wanted one. The chrome came off easily, with minimal bending, so I might be able to pass that on to others.

I figured that the removal of the vinyl would be the hard part, but it actually came off pretty easily. It is the adhesive that holds it on that is difficult to remove. An internet search showed that a product by 3M was supposed to remove strong adhesives without messing up automotive finishes...sounded perfect. I guess this adhesive is better than strong. Even acetone barely touches it. Even tried Xylene, mineral spirits, and 93 octane gasoline (out of desperation, and I would not recommend anyone else try this). Nothing is working. I will try Varsol, if I can find some, and then maybe carb cleaner. I had some carb cleaner that ate the paint, rubber, and everything but the metal. Then I would have to prime and paint the top, but at least I am not disturbing the original metal with scraping and sanding.

Currently, it is very ugly, worse than the vinyl top. But it gives me something to do after work in the afternoon... 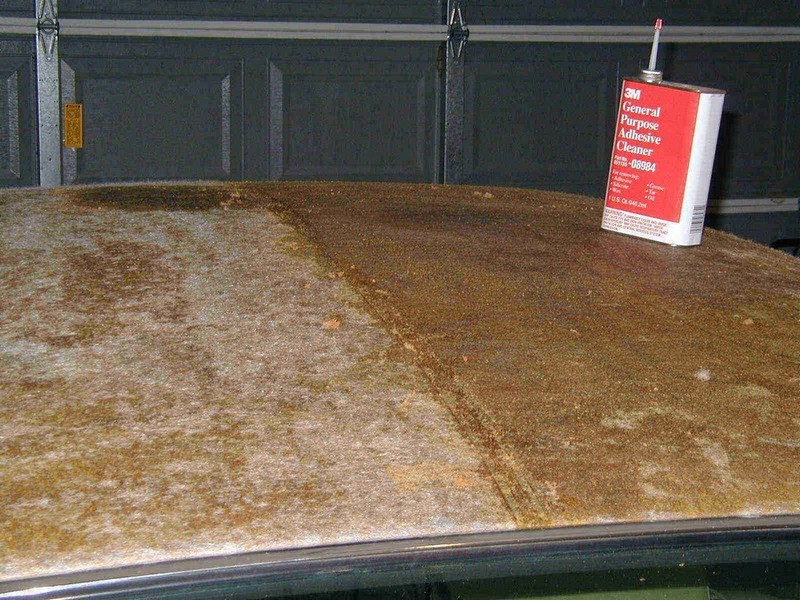 I was really suprised and relieved that the paint under the vinyl was still good...you can see it under the glue. And most importantly, NO RUST! Most of the horror stories I have read about vinyl tops is that the backing, which is a cottony fuzz, holds water against the body and makes a rusty mess out of the top. Many guys have removed the vinyl only to find a rusty mess, and eventually put another vinyl top back on rather than replace the metal. Since Della has always been garaged, she has seldom gotten wet, except during drives. One of the main reasons I wanted to remove the top, other than the non-sporty look, is that I did not want to deal with the rust in the future. Mavericks tend to have poor quality metal so I want to do what I can to preserve what I have for as long as possible.

7/09/2004 -- Tried a couple of other "heavy duty" adhesive removers, and nothing worked. Finally got tired of spending money on things that do not work, so I bought a paint stripper. This still took quite a bit of work but the adhesive came off as well as a bit of the paint and primer. Started sanding the rest, and am almost down to bare metal over the entire top. Had to cut off the anchor rivets that held down the chrome trim, and there are two small quarter-sized dents in the front. I will fiberglass the holes and dents and prime the entire top ASAP. No picture today since it is still quite ugly. Will take a shot after the dents/holes are filled and primed.

7/16/2004 -- Spent a couple of days working on sanding down the roof, filling in holes, and removing the rest of that adhesive. I used fiberglass rather than Bondo, just because I am more comfortable with glass and it tends to put off less dust. I guess I am just better at estimating how much material needs to be laid down with glass rather than Bondo. The picture below shows the first layer of primer (Rust-Oleum rust inhibiting primer, to reduce any chance of rust before I put paint on), after a quick wet-sand and a couple of spots of a second coat of primer (the wet-looking areas). I think it will look more even and smooth after a complete second coat and a second wet-sand.

Cost of various adhesive removers, despite being inefficient. Still part of the project costs. Also includes price of the tool used to remove the chrome trim from around the front and rear windows. 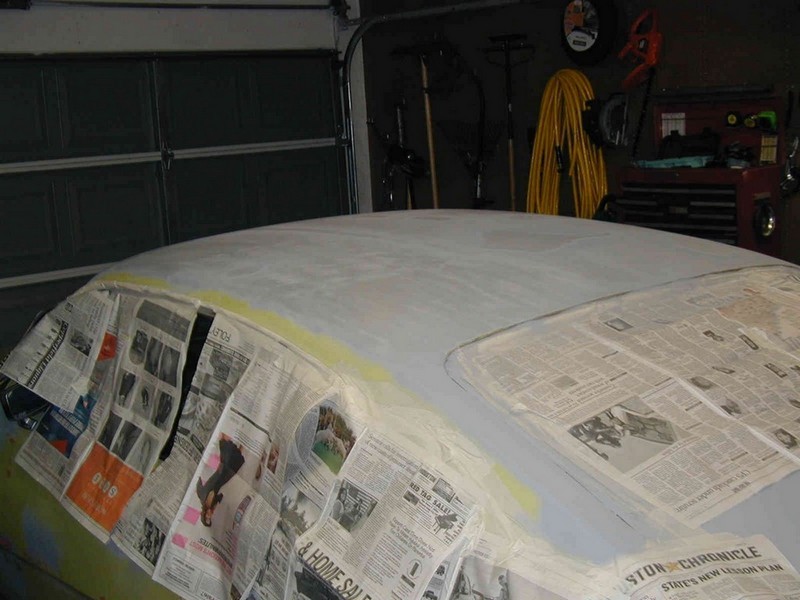 Despite not being part of the Maverick project, I thought I would interject a little Hemi news. Took my truck, a 2004 Dodge Ram 1500 with 5.7L Hemi, to the drag strip. I have been racing it on the street trying to get an estimate of how well it does 0 - 60. I estimated just under 7 seconds, and the internet says stock it runs 6.9s. My best pass (of 3) was 6.6518 @ 69.84mph on 1/8 mile. All three runs were pretty consistent. The Hemi has a really nice limited-slip rearend that keeps both tires firmly on the ground. After a good burnout, I was able to keep traction firm on the takeoff and really get on down the line, whereas the Maverick tended to break the tires loose if I put my foot into it.