8/8/06--It is so HOT!!! I got tired of the car being disassembled, so I closed the garage door, turned on the A/C and reassembled it. It is not perfectly straight, but at least it has fenders, two headlights, and I reinstalled the window and crank on the passenger side so I can go to the track again. I recycled the weatherstripping from the original door, and left off the vinyl  inner door panel. I also never got around to cutting the inner steel door skin and welding in the one from the 74 door, so there is no door handle to open the car door from the inside. Whoever is in the passenger seat will have to "Duke-boy" it, by either climbing out the open window or reaching out and opening it from the outside.

At least it is drivable again. Need to take it for a long drive and recharge the battery. It has been about 3 months since it has been taken apart and very little driving or running since then. 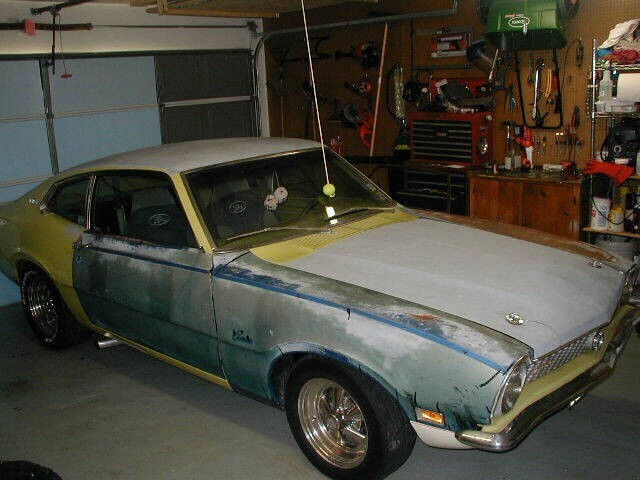 It sure is getting UGLIER before it gets pretty. At least it has nice straight lines with very little bondo! And, that is not rust on the tops of the fenders, but the paint has been rubbed down to the red primer so it looks kinda rusty. I might rub it all down and then primer it like the hood...

8/21/06--Finally did some real productive work. Roland Aquilar (rolanag2 on the forum) stopped by and brought his gas mig welder and showed me the basics on how to use it, and said "Enjoy it...I will be back next weekend to pick it up!"

So, I took off the fenders (again!) and ground off all the paint and sound deadener (and POR-15 on the treated fender) and welded all the trim holes up. I haven't ground them back down yet, as I want to do them slowly and prevent warping due to the heat.

There were trim holes all along under the wheelwell opening, 4 on each fender where the Comet badge was, and 6 or so along the top of the fenders from trim. On the passenger door, there were 5 or 6 more from trim. The picture on the right is a chunk of the hood that got the scoop. I used it for practice before I welded on the fenders. On the right is what the welds look like before being ground down. The 75argon/25CO2 gas that feed into the welder, along with no flux core wire, makes almost no spattering, and few pits in the weld. Once ground down, they look almost indistinguishable from the bare metal.

Before Roland comes to pick up his welder, I will try to make a mounting tab for the inside door handle on the passenger door, then just cut a hole for the opener, and that door will be done!

There is a Mini-meet in Waco on 9/23, Anna's birthday. I have wanted to go to one for a while, but have been busy every year. This year is Anna's 30th and she wants a big party. She offered to have the party the following week so we can take the mav up to Waco and show it off. I might do a coat of either POR-15 or black primer on both fenders and the hood to make the front half all one color. Just a single coat to not waste too much of it. It will be a good base coat primer for later painting over. The spot I put on my truck where it started to rust has faded to a very dark grey, but doesn't look bad at all. With this car being garaged all the time, it should stay deep black for a few years, at least.

8/22/06--Decided to weld in the spacer and cut out the small hole for the door handle, rather than ruin the entire door to cut out the inner metal panel and make these fit. I just put a piece of flat stock inside the door so it laps over a good inch (so it will distribute the pressure when you pull the door closed) and then filled in the space to make it level with the original door panel by sticking in the rounded triangular piece. It could have been smaller, but oh well, nobody will see it (unless they read about it here!).  On this piece, I welded a bead all the way around to even out the forces when the door is pushed closed. It should be plenty strong... (late entry...the backing plate fell off when I was tapping the hole, so I just welded the front piece all the way around. It seems to be perfectly strong. The backing piece was just tacked on in a couple places. I was thinking that the screw would penetrate it and sort of pinch the whole thing together...) 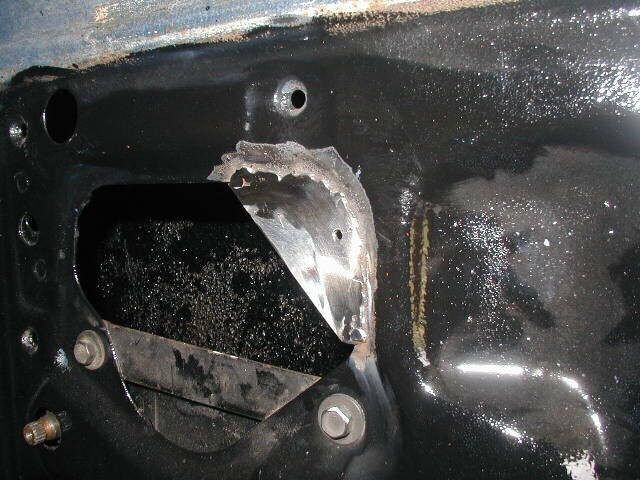 All I have left to do is cut measure and cut the hole in the bottom portion of the door where the door opening handle mounts, and reassemble. I should be able to reuse my original vinyl panel, until I make some replacements with leather or whatever I finally decide to use.

Went back out and cut the hole in the bottom...had to pound the two mounting holes toward the rear of the hole to sink them enough so the latch could sit low enough to clear the vinyl panel. The panel is falling apart. It is basically a cardboard cutout with the vinyl wrapped around it and glued down. Since it has been snapped on and off so many times, many of the holes are very weak, and some just broke, so of the 16 or so anchoring holes available, I am using about 10. It holds on well, everything works, and I will eventually make all new panels covered in leather or cloth on the final car. The area where there appears to be space along the top of the vinyl is just POR-15 that has been painted "outside the lines". Eventually, the entire thing will be painted with the POR-15 then whatever final color. 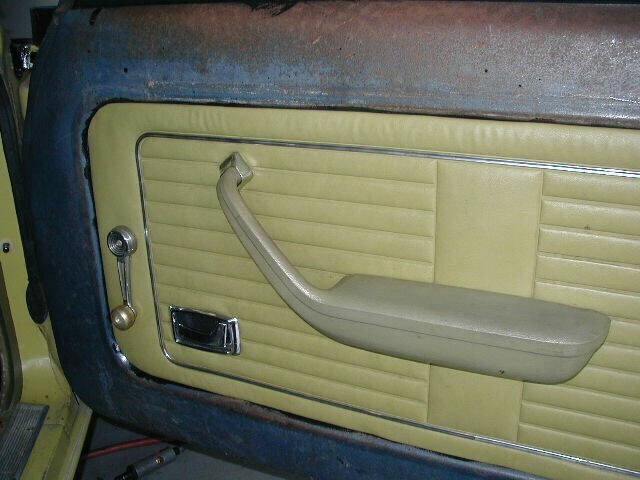 8/26/06--Spent some time yesterday pounding out some minor dents in the fenders, then prepped the inside for POR-15 treatment, and retreated the previously treated one where I sanded some off for welding. Both are now with at least 2 coats POR-15 on all inside fender surfaces, and mostly straight. Bought a DA sander, and will remove all paint from the outside of the fenders sometime in the near future, and prep the outside with a double coat of POR-15. The hood and the top of the car will get this soon, as well as the door. The door was reassembled, but I forgot to pound out a moderate sized dent in it, so I need to decide if I want to take it all apart and pound it out from the inside, requiring removal off the window and the door panel. I SHOULD do it this way, and POR-15 the inside of the door (the blue part in the picture above).

8/31/06--Bought some PPG Epoxy Primer in grey. Enough to mix up and shoot two quarts, $50. Should do both fenders and the top of the hood. The bottom of the hood will be POR-15 black. Will add the $50 to the total, since primer and paint will substantially increase the amount of money put into this project. Also bought some Lab-Metal, an aluminum-based one-part filler putty (no catalyst needed). I will try this instead of Bondo. Then I will have an entirely metal car, no plastic filler putty anywhere. I hear it is harder to shape and work with, but holds up better and no cracking. I hope that since it is slower/harder to sand, I won't grind too far down too fast like I tend to do with Bondo. I usually end up having to put Bondo on Bondo on Bondo due to sanding too far down.

The epoxy primer is supposed to seal the metal and prevent rust, similar to the POR-15, and provides an optimal surface for the paint to bond to. Since I won't afford to be able to paint for a couple more years, this will hold up for a while until I am ready to paint. It is supposed to get brittle after a lot of sun exposure, but being garage kept and driven 5-10 hours per month, I am guessing I should have no problems with that.