12/8/07--Found some GT40 heads after cruising the junk yards. One guy said he knew where there was a 1996 Explorer in Porter, just happens to be a very small town north of Houston and my dad works there. I asked him to stop by, and it just happened to be about 1/2 mile from his work. He called me when he got there and I told him what identifying marks to look at (3 stripes on front, F3ZE-AA casting numbers) and verified that they were not the P heads. He picked them up for me for $227. I started to port and polish the exhaust ports and found out the hard way that there is not a whole lot of material to port out, and hit a water jacket. Ended up having to weld that one up and clean it up a bit. But I now know that all I really have to do is knock off some casting bumps, open the ports just a bit, and polish them up. So it shouldn't take more than 8-10 hours per head.

I got the GT40 heads to replace the P heads because of the header/spark plug issues. I looked up the numbers and the Ps flow better out of the box, but the GT40s have a slightly larger exhaust valve and I can make them flow MUCH better with a port job.

These are the heads that were put on several years of the 351 Lightning engines, and Cobra 5.0 Mustangs, so they are capable of good numbers untouched. Hope to really get good numbers with a port job.

So, engine is almost completely assembled, but the heads will come off and these new ones will go on after I swap the springs, retainers, locks, and valve stem seals, and finish the P&P on them. Also, waiting for delivery of the pushrods and a new distributor gear that will match the cam (brass rather than steel). Then I could hypothetically put the motor in, but I want to wait and put on a 3000 stall converter and will probably try to rebuild the transmission or I will ruin it putting close to 400 hp on it with this new engine.

The pic below shows sort of a before and after shot of what the ports look like. The exhaust port on this one is done but I will still polish it up a little after I buy some finer dremel bits. I have taken off the valve guide casting marks and opened the ports so that they are about 15% or so wider all the way through, and smoothed out the angle so that it is more of a straight shot. I will probably gasket match the intake and just clean the ports up a bit because they flow pretty well already. Just knock off the casting bumps again.

The engine pic has the P heads on. The new heads will look the same when I am done except for the spark plug angle will be more pronounced so that the plugs stick between the header tubes, not right into them like they do now. 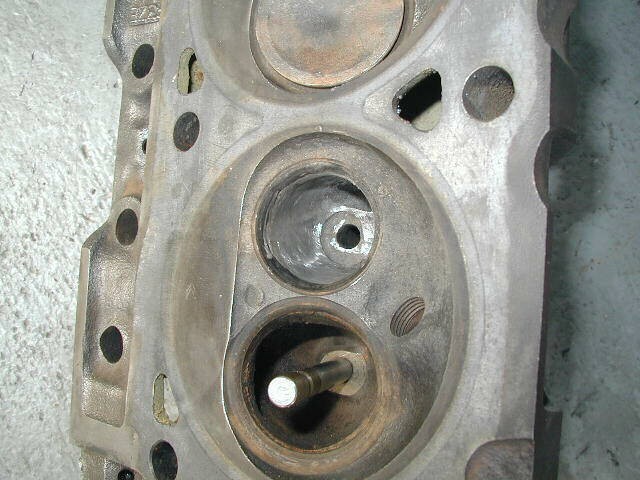 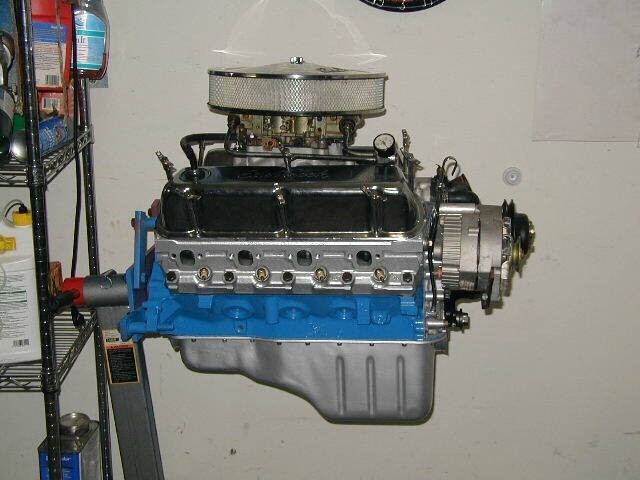