2/11/2004 -  Back to fixing up what Craig burned. Started tracking fuses and wires. This is when I finally identified that the mass of burned wires at the base of the steering column was the neutral safety switch and reverse light switch. This is only on column shifters, and was going to be "impossible" to replace. Since I eventually wanted to go to a floor shifter, to allow space for headers in the future, and just for the racing feel and aesthetics, I decided to shop around for floor shifters starting now, rather than attempt to hot wire the reverse and neutral switches. I also took the instrument panel out, noticed some burns on this as well. Tried to hot-glue the contacts into place but am failing so far. Took the clear plastic "window" out from in front of the speedo/instrument panel since the smoke had discolored it making it difficult to see through. Also, replaced all the lights in the panel, since most were shorted/burned/dead. The light bulbs are 194 mini lamps, and cheap.

2/15/2004 -- Took Della for a test drive, first time, to Surfside. Cool weather, windows down, no copilot. She tends to hesitate on slow take-offs, but responds well to full-floor takeoffs. Hmmm.

Got to Surfside, and discussed the options with dad. Finally decided, and checked to verify, that the vacuum advance on the distributor was not working. Also noted a little bit of coolant leaking (this will be important later on). On the way home, stopped and picked up a single advance distributor @71.43 - 30.00 core (lifetime warranty).

Got home, swapped them out, fixed.

2/16/2004 -- Anna went to work with me, she had the day off. On the way home from Houston, we stopped at Texas Performance Distributors, 8302 Jet Pilot, Houston, 77075. (800)624-6306. They had all three of the B&M shifters that I had narrowed my search down to. I tried them all out for feel, estimating where in the car they would be mounted. Decided on the B&M 80797 Street Bandit. Took me a few days to completely intall it, but it works wonders. Hold first gear as long as you want...shove it into second...and if you get around to it, slam it into third. Plus, this provides a new neutral safety switch and reverse lights. 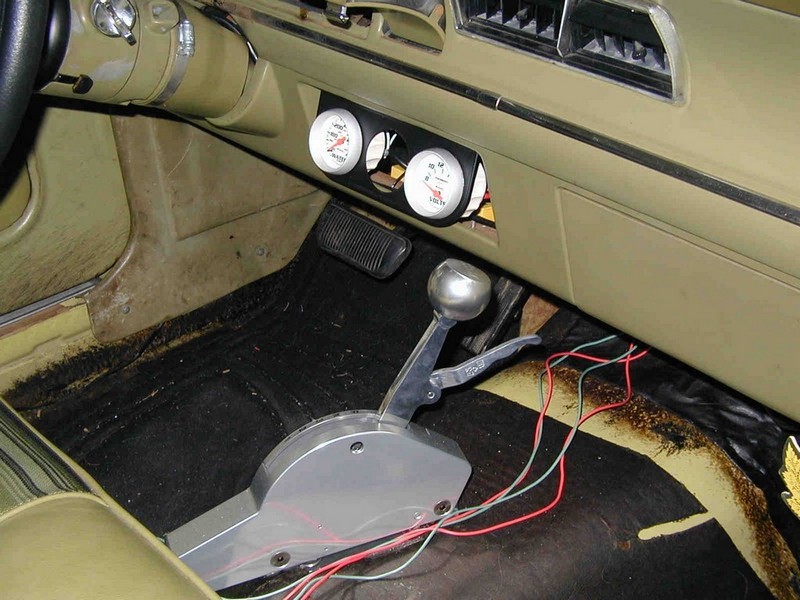 But now the horn is dead.

And still need carpet to cover up the wires and holes where the shifter is mounted and routed.

2/28/2004 -- Horn is dead AND car overheats when I drive highway (or faster) speeds. Dropped the thermostat, still overheats. When it does, it spews antifreeze all over the engine compartment, and since I have the hood off, all over the windshield. Purchased a three guage kit (oil pressure, water temp, and voltage. Voltage was easy to hook up, spliced into any hot wire under the dash. Water temp required tapping into one of the plugs in the manifold, again not too hard. Haven't done the oil pressure yet, since still working on keeping cool and worried about difficulty with tapping into the existing oil plug near the fuel pump. Just not much room to maneuver there.

Engine is idling cool, runs cool when slow, but quickly heats up when cruising. Gets to 200 and cap starts to spew, then continues to climb until I turn the engine off. Coolant continues to spew. Eventually, about half the fluid is purged and I get to start all over. Decided that radiator is clogged or dirty. Put a cleaner through it (~6.00 but lost receipt, also included 2 gals coolant @ ~4.00 each). Two part cleaner improved performance, but still overheated.