3/6/2004 -- Took the radiator off, and dropped it off at Kelton and Sons in Angleton. This old guy seemed to know a bit about radiators. He said mine was a three tube, rather than two tube model, and was in pretty good shape and was considered a "heavy duty" model. He determined that two of the three tubes were clogged. He cut the top off, reamed out all the tubes, and soldered the top back on. I asked about removing the calcium buildup in there, and he recommended against it saying that removing the calcium also removes a thin layer of the metal, leaving it overly sensitive to blowing out while under pressure. He said I should be able to run AC at highway speeds in Houston's summer heat with no problem, as long as I don't add anymore horsepower to the engine. Then, I will be shopping for a new radiator. Got it back into the car and on the highway at high speeds. It idled cold (still no thermostat, just to be safe) got to 200, then 210, but no spewage. Cooled down quick when I slowed and cruised around town. Stayed around 170-180. I will be looking for a overflow reservoir that is compatible, as well as a replacement fan shroud so I can handle the summer months. More coolant and another cap.

Also today, since I had nothing else to do, I bought a new steering wheel. The stock one was so big, I could barely get my legs under it, and it gave me too much leverage; felt like the powersteering system was way too powerful for this car. The new wheel only cost  27.05 w/tax. Got home to install it, had a little trouble getting the stock one off. The new one doesn't fit without a kit...Internet search found the kit, Hi-Lo has one in stock @ 17.31. Goes together fine once I figure out the logic and the instructions. Then needed a new horn. Back to Hi-Lo for 14.06. All installed, steers more like a real car, sounds like a truck horn. 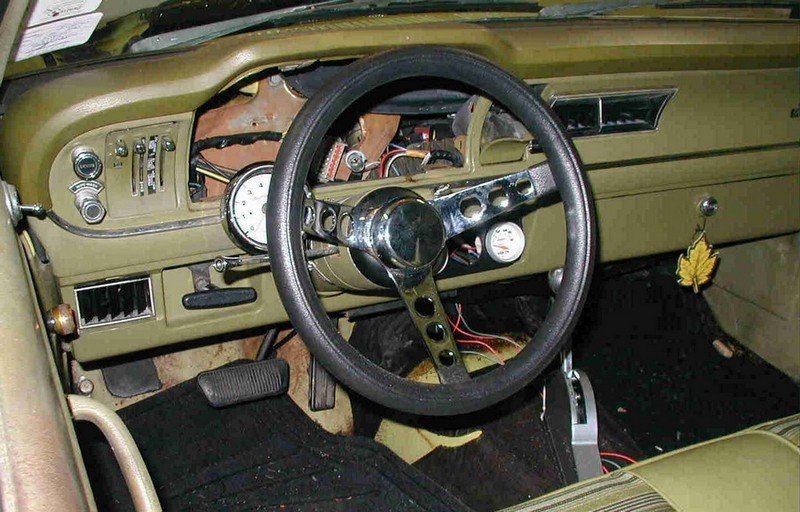 Dash instrument panel is back out to solve some lighting and buzzing problems. Mainly, when I put the turn signal to the right, each time the light lights up, the "key in/lights on" buzzer goes off. Also, need to buy some 2-in-one epoxy to "try" to fix the speedo sending unit.

3/12/2004 -- A trip to Hi-Lo, found that the stock thermostat is 190', got a 180' just to keep a little cooler. Dad says that with the thermostat out, the water runs through the radiator too fast to cool down, and will run hotter. Made some sense, especially when I saw how fast the water is moving in there without one. Put in the 180', ran highway for about 30 miles (approx distance to work) and ran right at 180'. Went up and down a little (about 5') when accelerating, and got to 200' when I stopped at the store and got back on the road at a stop light (I assume the water in the block heated up more, and when I got moving again, the hotter water circulated to the temperature sensor causing a higher readout). But, once I started up and started moving, it cooled right back down to 180' - 185'.

While removing and replacing the radiator, multiple time, I bent one of the oil-cooling tubes up a bit and it rubbed on the harmonic balancer until it created a little hole. Bought some J-B Weld (cheap fix, I know) and plugged up the hole. My 30-mile trip caused no more leakage.

Hood is back on, will take it to Surfside tomorrow for the St. Patty's parade. I figure the greenish tint to the car will be appropriate for the holiday.

3/14/2004 -- Trip to Surfside was uneventful. People at the parade roadblocks encouraged me to enter the parade with Della, but I figured I would wait a year to get her cleaned up and at least get rims and tires on her.

On the way, I noticed some rubbing sounds dealing with the steering, but ignored it. After getting to Surfside, the rubbing got worse, so I played around with it in the driveway. It clearly was a loud (and getting louder) rub coming from the powersteering pump. In the driveway, without the car moving, the pump whined louder under load, and spewed some fluid out the filler tube. Took the belt off to see if I could drive without it but the steering all but locked up without it. Started up and drove home anyway, and except for the same low whine I heard on the way, no problems. I had taken this apart and put new fluid and gasket when I first got the car. Today, I did it again. I see no damage nor unusual wear. Put it back together and painted it. Will install tomorrow. I believe I had the drive belt too tight forcing the impeller blades to rub by misalligning the pump faces, and as it got hot it expanded and whined. I will replace the belt (and the alternator belt) and install with only light pressure and see what happens. Also, will research the old red automatic transmission fluid versus the new clear stuff, which I am using. Maybe the old red stuff has higher viscosity and cooling properties which the older pump may need.