2/3/08--Dad came over to help me line the engine up as we dropped it in. I had to attach the flexwheel, and replace the front transmission seal. While I was popping out that seal, I bunged my knuckle on the bellhousing, and cut it down to the bone, layed right open. Anna tried to superglue it shut, but it was bleeding so bad and was so deep, we had to send dad home and head to the emergency room. Engine is on the hoist, and Anna's mustang gets to spend the next week out in the front driveway....

2/5/07--Put on gloves so I wouldn't mess up my stitches. Installed the front transmission seal, put a quart of trans fluid in the converter, and installed it. Engine is ready to go in as soon as I can get a second person to help me guide it in and bolt it to the tranny. Dad is supposed to come over Saturday morning. Shouldn't take an hour, if that, to get it in and then he can go home while I hook up all the stuff, including fuel lines, radiator, exhaust, trans cooler, etc. Then top off all the fluids and start it up!!!

Texas has approved to expand the license plates from 6 digits to 7, so there is a chance that I might be able to get a more personalized plate. But honestly, I kinda like the look of the vintage 1974 plate. I can always keep my options open...

2/9/08--Noon--Got the engine in, torque converter, er, torqued, tranny bolted up, just got to hook up all the other junk.

Dad got over and we fought with it before figuring out how to line it all up on the hoist, Anna ran the jack up and down, Dad worked the top, I got underneath and held up the tranny with my chest while lining it all up and starting bolts. Couldn't get the stock bolts to reach enough to pull it all together, so I used 2 of the shorter head bolts that are threaded all the way up and are about 5" long. Then I pulled the engine and trans together slowly, lined up the torque converter bolts with the flywheel, and pulled it all together. Then bolted the rest up and replaced the head bolts with the correct one.

Sent dad home and now I get to finish the rest up alone. Engine is still on the hoist and jacked up a bit so I can squeeze the headers in from the bottom. Driver header is in, and when I get the pass one bolted up, I will drop the motor down onto the mounts. 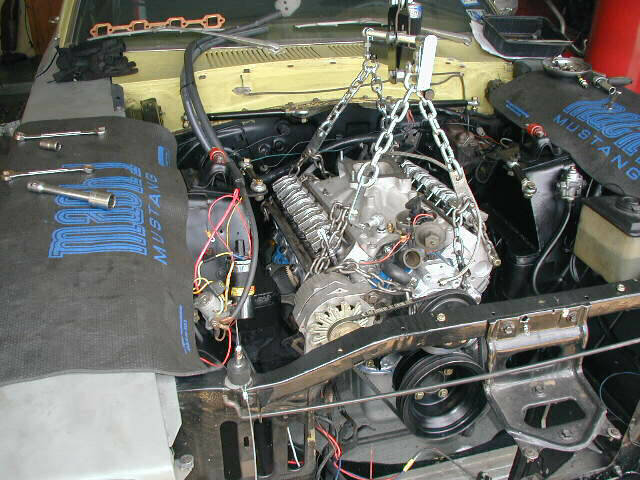 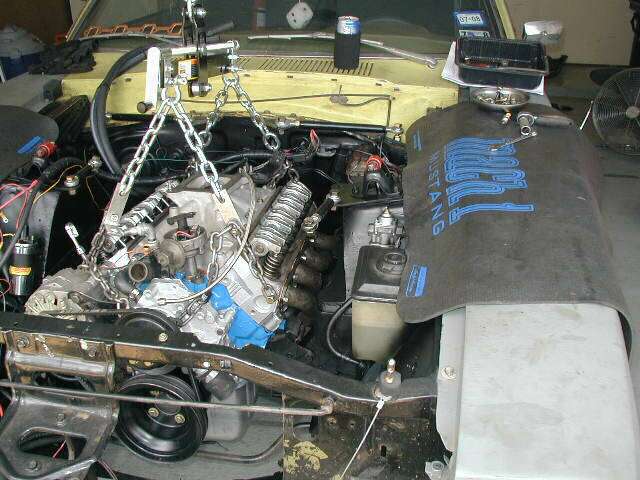 2/10/07--6pm--Engine is completely assembled, radiator is in, topped of the trans fluid, coolant, and tried to start it up earlier, but it is backfiring through the carb, and starting a small fire that I need to jump out and blow out by mouth...

I was pretty sure it was timing, since I had to pull out the distributor to run the oil pump to prime the oiling system before I started the motor up the first time. Apparently, when I put it back in it wasn't right on. So tried it a couple more times, then finally pulled off the valve covers, marked each intake rocker, rotated the motor by hand one more time and verified the firing order, then put it at TDC and lined up the distributor. I turned the motor over and nothing...Anna said "shoot some starter fluid into it" so I did and it lit right up and ran nice and smooth. Cut the engine, put on the valve covers, and started it up again, but if I even touched the gas, it would die. It idled fine at around 750, but didn't want to go higher. I took off all accelerator pump action thinking it was drowning it, and started it back up, and same thing. This time, instead of slowly accellerating, I gunned it to about 2500 rpm and it ran beautifully after that. Now I can accelerate slowly or quickly and it runs fine. Don't know what I did???

Still need to work on the carb. The vacuum advance nipple pulls a vacuum at idle, so I need to install one up on the metering block that draws none at idle, but pulls at acceleration. Then fine-tune the carb for idle richness and see how it runs full out.

Only other problem I see is the starter is sticking on for a second or two after the engine starts and I let off the key. Need to figure this one out quickly and fix it.

Also, ended up buying a new battery. The other one was in since the Welders got the car after Della passed away, and with the higher compression engine, it had a VERY hard time turning it over. It is a 7 year old battery, and probably needed replaced anyway. Got one with the most cold cranking amps I could find.

2/12/08--Got on the phone with John (Wagesofsin) and he walked me through the initial tuning of my carb. This included pulling the "sight" screws out and adjusting the floats by loosening the screw on top, adjusting the floats down by tightening the hex-nut, and and doing this until the gas stops coming out the sight holes when the fuel pump is running but car is turned off. Then we adjusted the idle mixture screws tight until it didn't want to idle at 800, and then opening them just a bit. Also timed it to 14 initial, and plugged the nipple at the bottom that has vacuum all the time and screwing in a new one in the front metering block that is pulling a vacuum only when accelerating.

It runs better now, but still a little rich. I will be disassembling the carb this week and letting it soak for a few days in mineral spirits, then rebuilding it with a Holley Double Pump Rebuild Kit this weekend.

2/16/08--I disassembled the carb after work on Tuesday, and soaked the small parts in mineral spirits, and the throttle body and plate in brake cleaner. Friday after work, I took some brushes to the bigger parts and got the grime off, and reassembled it all. BUT, there was an extra ball in the brake cleaner, about the size of a BB. It didn't appear to fit anywhere, and the instructions didn't show any that weren't already installed. I called Holley tech and he said if I didn't see a spring and some other items in this one part of the disassembled carb, then I can throw the ball away. Apparently, a previous owner had removed the other stuff and the ball (a part of a valve) was left over and no longer needed.

So I put the carb back on and it runs great! Then I ran a battery cable from a hole in the frame that I drilled and tapped, and used it to ground the engine to the frame. Also, popped off the bronze distributor gear (which was showing no wear yet, so I kept it) and installed my steel gear. Supposed to rain today, so I stopped here. Tomorrow, it is supposed to clear up so I will probably take the car off the wheel dollies and take it for a drive!!!

Still "hiccupping" right before the secondaries are opening, and didn't want to idle in gear, but I fixed the idle in the McDonald's parking lot. I had it too lean.

) and drove about 5 miles, then cruised around town for about an hour.

No burnouts, no racing, just cruising.

Engine is running too cool, might have to bump up the thermostat. It is cooler here this morning, around 70 degrees out, and the car ran about 170-175, then down to 160-165 when I got out on the highway...better than running too hot, and this setup may be perfect for hot summer months.

2/19/08--Still have some "high-speed wobbles" and decided to narrow down what the problem is. I started by jacking up the rear end and running the car up until it started to wobble. Around 35 mph, it started to shimmy pretty bad. So I turned the driveshaft 180 degrees to see if it was a "phase" issue. It then went up to 45mph before shimmying. Then I pulled the rear tires off, still shimmy at 45. Then pulled off the rear drums and still a shimmy. This cancels out the tire balance, drive shaft phase (even though some of it was corrected by re-phasing it), and drums out of balance. Also greased up the U-joints and tightened them at varying torques to make sure that wasn't the problem. Finally, I took all preload off the Caltracs. Almost all the shimmy is now gone, but I am still feeling some up around 60 mph. Last year, when the carpet was out, I put a ballpoint pen down in a hole in the floor and placed it on the driveshaft while driving slowly, and it bounced up and down about 1/4-3/8", so I now think that a good portion of the shimmy is bent and/or imbalanced driveshaft, but some is being added by pinion angle, which is worsened by preloading the rear end. So I need to take the shaft in to someone who can balance it. While I am doing that, I need to take the differential in to have it checked for backlash to see if that whine I have is from something not being lined up right.

Then I installed one of my front stone guards, grills, and drilled holes to line my front bumper up where it is supposed to be.

Also got the Holley Jet kit today, and as soon as I get a chance, will change the jets from 65/67 to 68/72 and see if it runs better. This should be closer to the stock configuration.

2/29/08--Good day. Got my work done, and going to California next week. But had a couple hours to swap to the 68/72 jets and this solved almost all my problems. Feels a little lean above 4500rpm, but I think another jet swap will fix that.

I stopped by Mikey's shop to talk to Dwayne about a free 9" housing he said he would give me, and I will try to swing by his house tomorrow and pick it up. It ended up being an old housing from an old early 70s bronco, which is only 1" wider on each side than the maverick, so it will EASILY fit with a different choice of rims!

3/25/08--Not doing much in March, so I added it to the end of February rather than create it's own page.

Just bought 2 new u-joints, and taking the old driveshaft in for balance. If it is out too much, I will either buy a new/salvaged aluminum shaft or have the one above cut to fit.

3/26/08--Took the stock steel driveshaft in for balancing. They put the rear u-joint on, spun it, and found that it had .012" runout that they straightened out for me down to .002", and added a different weight at one end. Installed it but haven't had a chance to try it out. Cost of u-joint, balance, and straightening was $101.

3/27/08--Took it out for a drive today and it is MUCH smoother. I still have a little shimmy, not sure if it is just from the resonance of the exhaust, and I only feel it (hear it) in the passenger door that is rattling, and only at low speeds. I think the door seal is wasted and the door is rattling due to the rough running of the engine and the loud exhaust. But at 40-60 mph, there is no rattle from the driveshaft....