4/4/08--Took rear axles out and inspected them and they are still perfectly straight, so no twisting from using the spool. Then I removed the differential and took it and the axles in for repair. The axles need new bearings pressed on, and differential needs the pinion depth adjusted, or something. There is a little slack and it is causing a hum when I let off the gas, and I want that noise to stop.

4/11/08--Got the rear back, he said it was aligned well, but I did not have the pinion nut on tight enough. It needs close to 200 ft/lbs, and there was no way I could do that. I figured I did not have enough torque to crush the crush sleeve...He also said the axle bearings were fine and did not swap them out.

Got it all put back together again. Used 1 qt of Lucas oil, and then the remaining 1.5 or so qts was Castrol 75W-90. Took it for a quick spin and the vibration is almost gone. I think some of the vibes may be from a poor/cheap harmonic dampener (stock replacement from O'Reilly). It isn't bad, and when I get it up above 3000 rpms, it is not noticeable. Even less so at 5000 rpms.

Carb would idle and then die as soon as I put it in gear. I thought I might need to mess with the jets, but found out I had just leaned out the idle screws too much. Backed them out from 1/2 turn to 1 full turn, and runs much better now.

I kept tripping my fuse on my electric fuel pump. I did this on the way home from dropping off the trailer after the car show last year. Then a few more times since. And today, twice in about 10 minutes. Luckily, the last time was after I had parked in O'Reilly's driveway and was getting ready to shut it down anyway. Luckily, since that was my LAST 7.5 A fuse. O'Reilly was sold out! Walked half a block over to AutoZone, SOLD OUT!!! Since I had a little walking to do, I was thinking to myself that it can NOT be a problem with the pump, since it is pretty new. So I got under the car, looked at all the wiring, and then in the trunk. VOILA! the battery is not mounted in the trunk, and is sliding around. It slid over the hot wire where it comes through a small hole in the floor. There was a rubber grommet protecting the wire, but it had popped out and the battery had pinched the wire against bare metal stripping away some of the insulation. So I borrowed some electrical tape and wire cutters from O'Reilly, cut that bad part out, taped up the wire, and bought a "variety kit" of fuses for $4, which had only ONE 7.5 A fuse in it! But, this got me home where I can fix it correctly.

Got home, left the car out, and cleaned all the paint, grease, etc. off the garage floor under where the car had been setting all these months. Car is back on dollies, and put against the wall so Anna can park her mustang in there again.

I need to finish the interior work in the trunk, mount that battery, and most importantly, GET SOME SEATS!!! and soon!

5/1/08--gonna cheat again and put two months down on one page, because I am not doing much to the car right now.

Took the car out for the drive to the UPS. It is running good and strong, but starts to miss a little above 4500 rpm. I just put in new spark plugs (sold my shorty plugs to a guy running P heads) and the plugs were recommended to be gapped at .054. WAY more than I usually run them, but I figured I would give it a try. I think they are not firing consistently at that high gap, so I will back it down to the .045 I used to run and see if it clears up. (price of sale of shorty plugs subtracted from total)

Then took it out in the country, found a quiet spot, and did a little burnout. It lights them up MUCH quicker and easier than it used to. This is the first burnout I have done on the new motor....

Also started to run a little warm. Ran nice and cool in town, stayed right at 180, but when I got on the highway and got it up to around 70 for 5 miles or so, it climbed to 200 and hovered there. Might have an air pocket in the cooling system?

Will check both issues when the engine cools down. Usually, it is the other way around, running hot at low speeds and cool at high speeds, and the new aluminum radiator has never run hot, so there cannot be too much troubleshooting to fix this...

UPDATE--got to work on other things and got my mind off the car, then came back to think about it, and I am starting to believe the miss and running hot are both related to running too lean on the secondary metering block...still have not gone out to look at it...

5/4/08--Roland came by and brought the high back bucket seats from his red car ($50). Not in great shape, but I am pretty sure I can fix them up and use them... I will need to have the foam replaced, and of course, the vinyl, but for now, they have the brackets, they fit, and there are two of them!!! I will put seat covers over them and use them as is for a while... 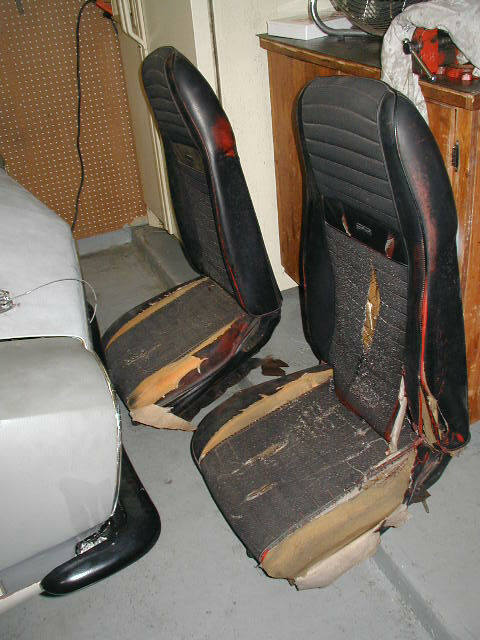 5/7/08--Got the seats in over the past few afternoons, and just put covers on them to make them less ugly. Passenger seat is actually quite comfortable, but the driver seat has very little foam left and I sit very low in it, with no support. But, I now have 2 seats, and I am not going to complain.

Car was running kind of rough, and still have some kind of carb issue. I pulled the distributor cap and rotor and noticed that they were rubbing and eating away at each other, and also noticed that the distributor bolt was loose, so the timing was who-knows-where and that was why it was running so crappy. So I bought a distributor cap, rotor, and spacer from an 85 Mustang GT and got the initial timing to around 15 btdc, and it is doing much better now. Still getting white spark plugs, so I either have a vacuum leak or the plugs are too hot, more likely the vacuum leak, since these are stock-replacement plugs.

5/23/08--Just driving it around. Got a couple of minor issues to work out. Vibration appears to be a shoddy harmonic balancer so I ordered a high performance balancer to see if that correct the problem ($85 shipped). Also, running lean on the carburetor. Made several calls to Holley over the past few weeks, but their help is not very good, and each person that answers the phone (after a 20 minute hold) has a different solution, none of which work to fix the problem. So I called QuickFuel and he gave me a short list of 4 or 5 things to look at that would normally cause a lean mixture, and encouraged me to call after I tried those and we would explore some more options.

I hit 6500 rpm today while going to the store. It felt GOOD!!! The vibration is not noticeable above 5000, or at least it doesn't get worse as the engine spins faster, and I only got there for a second before shifting. I expected it to be more scary than it was. Now that I have been there, I am not so worried about shifting at 5000 or 5500. It did not feel as though it was done pulling at 6500, I just got scared and pushed it into second. I think that will be my new shift point when/if I race it.