1/6/07--Been sick for a while...sinus infection, sore throat, and all that. I didn't even get much done over the Christmas holidays. What I DID do...

Took the seats and the rear half of the carpet out, put in a new drivers side seatbelt that wasn't frayed at the top, and had a cover at the bottom that wasn't all cracked and broken. I welded up some holes in the floor that were no longer being used. I took the extension housing off the transmission, took it to a local tranny guy and he swapped out the bushing and rear seal. I bought a lower radiator hose from e-bay...a flexible stainless hose with fancy chrome covers over the hose clamps, and put that on today. I also started to work on the seats. They have the mounting tabs on them to fit the Honda floor. Of course, the Honda floor is nothing like the Maverick floor, so I need to fabricate some brackets to mount the seats and sliding mechanisms onto the Maverick floor. So today, I started to drill out the spot-welds on the mounting tabs on the seats and cut the welds to remove the tabs. I only got one seat completed, since it is a bit of work to grind these things off. Then I put POR-15 on the exposed metal so there will not be any rust later on. I also took the top radiator mount off, sanded it to scuff it up a little, and put it outside in the rain. I appears that POR-15 bonds better to metal with a light coat of rust, so I will let it rust over the next day or two, then apply POR-15, and reinstall it. Then I will make some brackets that will hold the seats to the floor in a way that is somewhat professional looking. I haven't figured that part out yet. Might just install angle iron to the floor, then mount the seats to them and weld or bolt them on.

Still need to straighten the steering wheel out...it is aiming a little to the left when driving straight, and that make me not able to turn my right turn signal on when going straight, since it is off just enough to hit one of the cogs in the signal assembly. Also, still need to replace the tie rod ends (all 4 of them) with new ones, and swap out some rubber bushings on the sway bar, and my front end will be "rebuilt", as far as I am concerned. 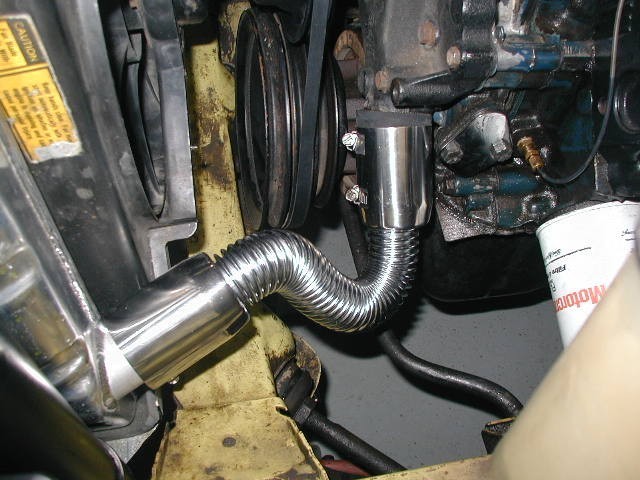 I could not find a lower radiator hose that would fit correctly since the outlet on the radiator comes out at an inward angle. So one of the guys on the Forum told me to buy this off e-bay. I cut the hose to fit, and mounted it right up with just a bit of a curve to not kink the hose. It is all stainless, and (so far) does not appear to be leaking. Kinda looks fancy, too.

Also, swapped out the tailshaft bushing and rear seal. Took it to Accurate Transmission in town, and he took one of his guys off the job, told him to swap them really quick, then asked for $20. I asked if he took debit card, and he asked if I would just come back later with cash, since he was just going to give it to the guy that did the work. So I ran to the grocery store, got $20 over, and came back and gave it to him. I like that kind of business.

1/14/07--Jordan down the street has had a set of slicks in his garage for a couple years, and I have been trying to snag them from him since. He has been trying to snag my extra hood with the scoop. He finally came around and offered a trade. I got a second 14X6 rim (for a drag-night front tire) and I will use the spare out of the trunk for the other front tire. The slicks are on some rims that won't fit the mav, but he gave me an aluminum one-piece American Racing rim, and will give me a second one when he gets new rims for his mav, and pulls the other 2 off his car. On drag nights, I will probably move my 215 front tires to the back, put the small 175 tires on the front, and put the slicks in the trunk. The slicks are Mickey Thompson ET Street tires, and are street legal (barely). So if I really wanted to, I could put them on and drive to the track.

I hope to get into the garage today and start fabbing up some seat mounts. I have ordered carpet samples to help me choose a color and cut of carpet (choices include 2 kinds of pile or cut pile). I might be buying carpet by the end of the month...