3/13/2005-Not much going on. Just an update to let any interested readers know that I haven't given up. It is just running too good to mess with it. I have done minor adjustments, but mostly just driving in the afternoons, when the weather is nice.

I lost my heating ability, after the previous re-wiring job. Got on Maverick forums and asked around, and finally took the heater hoses off the manifold and blew into them. The heater core was clogged, with who knows what. Put a little pressure on it, ran clean water through it until it ran clear. Anna said she saw "a chunk" come out while I was flushing it. I guess one time I took off the manifold or heads, and gasket gunk got into the core, and acting like a filter, trapped all the trash until it clogged up. I have been running the heater with no heat all winter. The only heat is coming from the hole where the steering wheel come through the firewall. I need to replace that "gasket" to cover that hole, as it was burned with the carpet way back in the side-pipe days.

Speaking of fires...I cut the bottom off the shackles yesterday. I had a towel under the trans to catch a slow leak at the shifter lever. Well, some of the sparks from the cutting caught the towel on fire. The mixture of trans fluid, coolant, and whatever else has dripped on it over the past few months caught fire, and I had a beautiful small 1" tall flame over the entire towel. This burned for about 5 minutes, before I took off my goggles and noticed it. LUCKY FOR ME, it was a small flame and did not ignite my fuel line, or burn the bottom of my oil pan or transmission. No damage to car or floor, just lost a towel.

Today, I got online and explored the best method for timing the distributor. I cleaned off the timing marks, and marked 10 degrees BTDC with whiteout. All the sites suggested 8-10 degrees, so I figured if I could go at the higher end without pinging, I would do it. Marked it semi-permanently, and timed it. Haven't driven it, but it seems to idle smoother. Also, I remembered to PLUG THE VACUUM LINE this time. I always take it off, but forget to plug it. It should be timed to about perfect right now. Runs about 25-30 BTDC when revved, which is apparently right about on target. At least until I get an MD6AL and new ignition system...

One last thing I have done, beside drive it...I bought a set of those anchors that go in the square holes in truck beds for tying down your stuff. The rubber bushing that goes in the hole is 2X2X1, which was perfect size for jacking up the rear of my hood for a "cowl" effect. This will do a couple things for me. 1) reduce air drag from the engine compartment, as air comes in the radiator, then is forced against the firewall and down under the car. I feel this effect when that hot air is forced into the hole where my steering wheel comes in, and that is some HOT air. 2) the hot air is forced out the top of the hood near the windshield, allowing a cool flow of air over the top of the engine, cooling the engine a bit, and giving the intake a much cooler air flow, which should increase horsepower a bit. So far, I have noticed that the air coming into the hole at my steering wheel is WAY COOLER! I am talking about 30 degrees or so cooler. It used to feel like the hair on my shins was just shy of catching fire, and now it feels like I have the heater on about half way. The price was $7, so I am not even going to add it to the price of the car. These are silicone glued to the car, and can be removed quite easily without damaging the paint. Pic below. 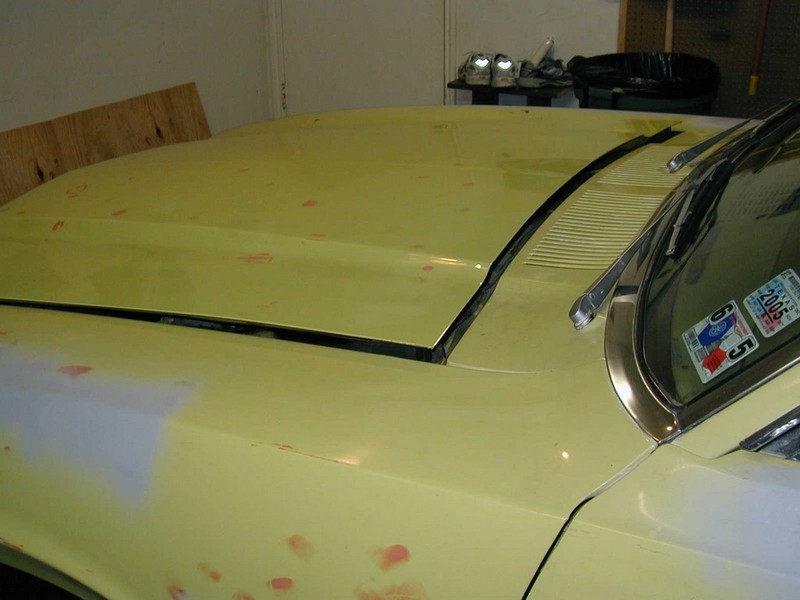 I have been researching what I can do with the existing motor without blowing it up, and here is my list for projects for the upcoming year.

Any items needed for a smooth cam change, probably another $100-150

Possibly replace the head gaskets with metal shim gaskets, to increase my measly compression by half a point or so. Might get me 8.5:1 or so. This would probably increase my power more than any of the other jobs I have done so far.