5/6/2004 -- Took Della in for an allignment at Advance Auto Care (the shop that Craig and Louie bought after leaving Lube N Tune). I thought I would give these guys a try again, since they OWE ME! I told Louie to check the power steering valve while it was on the rack to help adjust the steering pull, prior to alligning it. He took off the cap, and started her up, and it pulled to the right and spit about a cup of fluid out quickly. Another guy in the shop has worked on these before (Ford models) and verified that it should not spew. Another two guys came in and also verified that. Furthermore, they said I should replace the valve and the cylinder (another $80).

Louie did not charge me for the hour he spent today. I will swap out the valve, get a cylinder, install, and return to Louie sometime later. Anna wants me to slow down on spending right now...

5/28/2004 -- Got in touch with the kid down the street that has two Mavs in his back yard, restoring one and using the other for parts. Asked his dad if I could pull the speedometer cable and sending gear, offering him $30 for both. He said I could have them, but he would not accept payment; he simply wanted me to give him my old sending gear to fill the hole in the part-car transmission. Went behind his back after pulling the part and asked the mother, she agreed that we are all "car people" and they would not charge me. The speedo cable has a spot where the plastic coating is rotted away, the it turns smoothly. I will try to grease inside the hole and cover with electrical tape or similar to keep it dry.

So far, May has been a very inexpensive month...

I just knocked on the wood of my desk, because in about an hour, I will be running Della on the Angleton Dragway, a local 1/8 mile track, for her first timed run. I trust that she won't become expensive on me tonight.

Note slip 2: The guy I race had a tubed out Beretta with 560-something cubic inch engine, fuel injection, etc. Probably the worst beating I will ever get. He was the fastest guy at the track tonight, and I was lucky enough to race against him. He got 119.78mph @ 5.8185 s compared to my 66.69mph @ 10.5908s. I was kinda upset, but visited with him afterwards and saw that he was a serious PRO...all fiberglass, nitromethane fuel, injected, serious! Anna noted that he was wearing flame-retardant pants and weird "elfy" driving shoes. Not cheap New Balance like me. Oh well, I was humbled.

See burnout picture below. I will have to do some work on the rearend to get positrac. Apparently, one tire is breaking loose and I am going nowhere.

Cost to race is only $15 all night for as many runs as I want. Cost to watch is $10. This is kinda cheap for a night's entertainment. 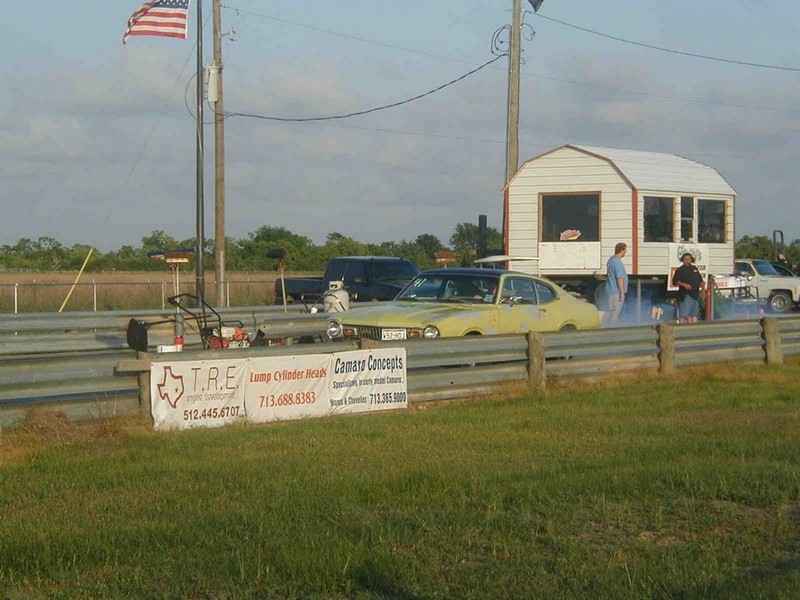 Memorable event -- After we got home from the track, Tuesday needed a ride (since I had been running the car most of the day without letting her go with me, she was quite upset and anxious). So we loaded her up and went for a short drive around the neighborhood. After our typical pitstop for Tuesday to relieve herself, Anna decided that SHE WANTED TO DRIVE THE CAR! She put about 2 miles on it, slowly, due to not having her license with her and it being Memorial Day weekend (cops everywhere). Anna always said she would wait until we had it painted before she would drive. I guess with the excitement of the racing tonight, and under cover of darkness (so her friends and workmates couldn't recognize her) she felt safe to drive.

Also, at the track, I was approached by a  guy who has a 1972 Grabber that he will "just about give away". He says it has no motor (trans?) and is rusting where it sits. Got his phone number and location, will take the towbar on Memorial Day and give him a visit. He says it has all the bumper/panels. I just hope this has some salvagable parts that I can use. May sell the rest or e-bay them. Dump what is left. Hopefully, I can sneak this thing into my back yard for a month or so while I get the parts I need without getting harrassed by the Homeowner Association. Otherwise, I will have to get a storage bay for a couple months and drive back and forth with tools. This could get expensive since my Dodge gets only 15mpg and gas is currently hovering around $1.90!

5/31/2004 -- I found the guy's house with the 72 Grabber. It was in low-lying river-bottom property and much of the body was rusted through. The bumpers were in pretty good shape, with only a couple of small dents and surface rust. They would make good cores for re-chrome. The panels that go behind the bumpers were in good shape, the front being a little bent out of shape. Plus, the Grabber has the rear spoiler, so I "grabbed" the trunk lid, and the fins that shape the spoiler to the non-spoiled body style. The car was too rusty to tow, and most of the tires were flat. I would have liked the whole thing, for the panels, bumper, and rear end (so I could try some trick I learned at the track where you weld a couple of tacks on the rearend to "lock it up"), but I was afraid that if I tried to tow it, it would fall apart on the highway.

I offered $50 for just the bumpers...he thought about it and finally said "sure". As I started pulling the bumpers, I started noticing that the panels were salvagable and offered to double the price for the whole bit. He initially refused, but I felt bad feeling I was ripping him off, and his eyes lit up when he heard "hundred".