11/19/2004 -- I have been conversing with Will on the Maverick Forums http://mmb.maverick.to/index.php and he had some items in his garage for sale. Among them was 15X7 and 15X8 Cragar S/S rims (front backspace 4", rear backspace 4-1/4"). Pretty much what I was looking for. With tires, all four for only $100. I was letting a kid in Seattle have the first chance at them, but he never got serious so Will e-mailed me and said he would meet me halfway from Waco. We agreed on College Station, and met there at 8:30am. I had not seen the rims, just at fuzzy digital photo on the Forums. He was honest about them being old and a bit rusty. But, I figured it would look better than the stock 14X6 with bicycle tires. When I got there to see them in person, they were very dirty, from sitting around in a garage for years. One of the fronts had hit a curb and had a bit of a bend in it, clearly seen in my pictures. But, so far, they are cleaning up relatively nicely. Even the rust is coming off leaving a bit of pitting, but decent color. I have only rubbed them a little with soap and water on a green pad.

Had to order Cragar S/S lug nut sets from Hi-Lo, should be in by Monday or Tuesday. Also a tub of Mother's Chrome Polish.

Notice how clean they get with little rubbing, and the size comparison on the third picture. I will definitely get larger tires on the rear, may keep the same size on the front...? 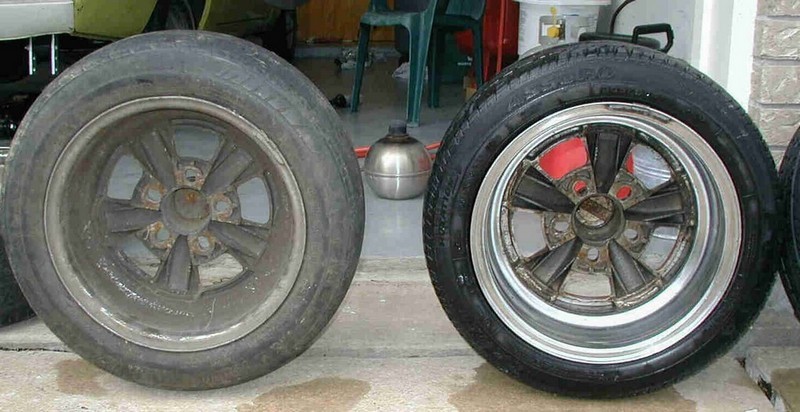 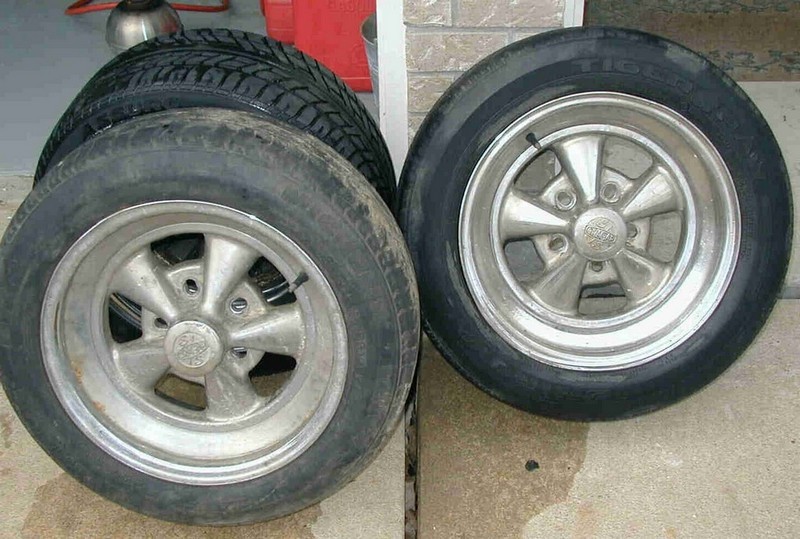 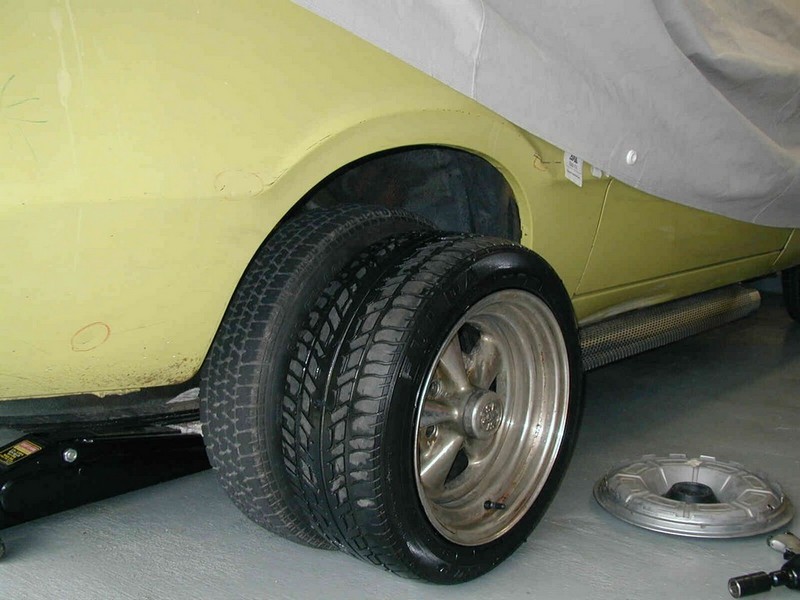 11/20/2004 -- I decided to, rather than gamble by buying new tires for the rims and having a potential for being too big and rubbing, or being too small, or just not looking right, I would buy used tires and try them out in various sizes until I get what I am looking for. There is a place in Freeport that has a really good selection of used tires, for $33 mounted and balanced, with new valvestems. I got two at P245/60R15. BF Goodrich T/A Radials with about 1 or 2 thousand miles left on them. I am still waiting for those lug-nut/washer combos to come in at Hi-Lo, before I can actually drive with the new tires on. 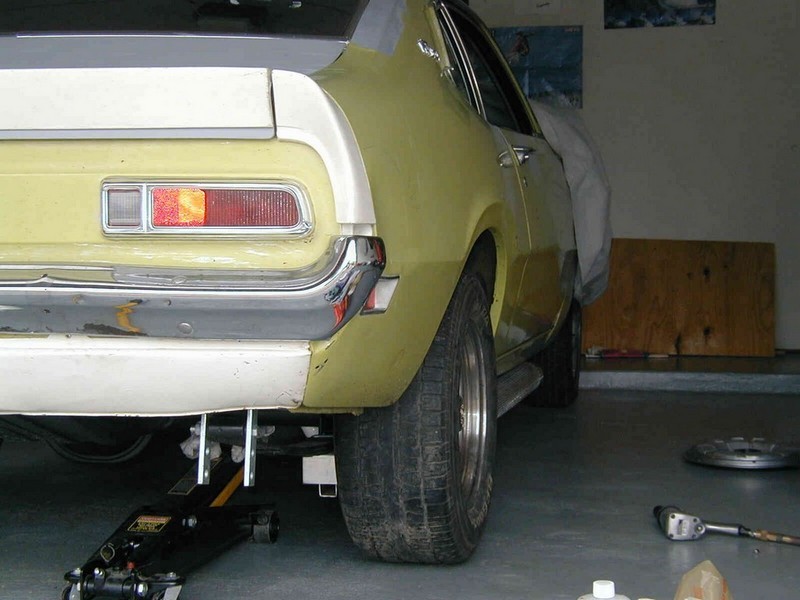 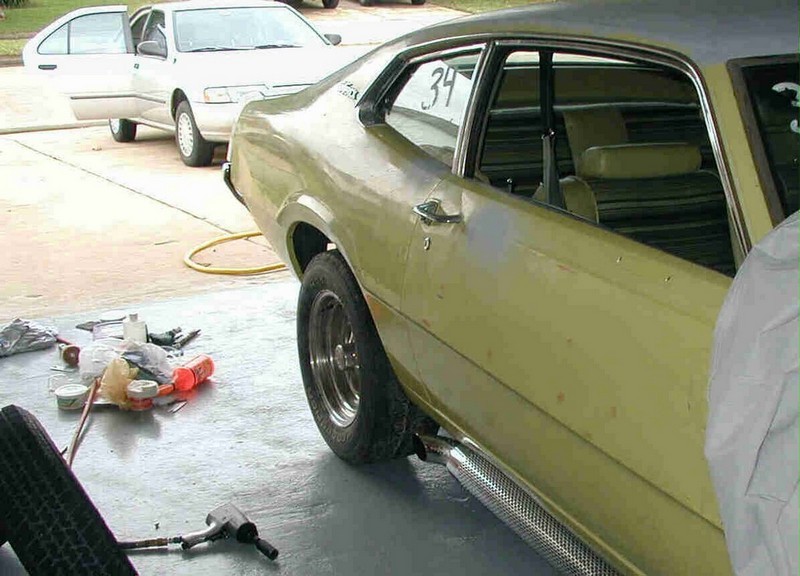 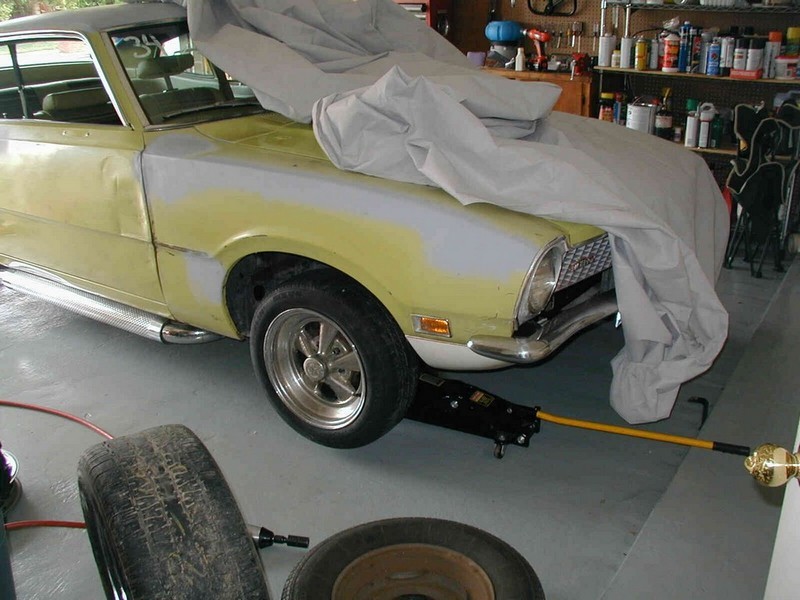 I like the look of the rear tire, it fits well within the wheel well, maybe go a little taller on the final version. I will have to drive it around to make sure I am not getting any rubbing. The width looks perfect. The front tire is the one that came with the rims. I think I will have to go a little taller, and a lot wider on this one also. The front is still in the air in picture 3, but I believe that when on the ground, it will still have too much space around it.

I worked quite a while on the rims today, and they are starting to look pretty good. Especially for the price. There is a bit of discoloration in the chrome, and a few places where the chrome has been scratched to the steel. The rust on the two worst ones came all off with 400grit wet sandpaper, then I hit the entire rim with a cotton wheel on the pencil grinder with polishing compound.  Some of the spokes came out looking like new, but some have the discoloration and less shine. It looks like an oxidation, and my need to be removed with an chemical cleaner, rather than polishing. Regardless, these rims look 200% better (no, more than that even) than the stock tire/rims. These should be harder to break loose, even with the little tread that is left, giving me better traction and takeoffs. I am anxious to see how these bigger tires affect my gas mileage/RPMs at cruising speeds. I will be losing some of my 0-60 takeoff speed, but will be able to cruise on the highway at maybe 2000 or 2500 RPMs at 70, rather than screaming at 3000RPMs like before.

11/22/2004 -- I got the lug nuts in today. and mounted the rear tires. Didn't do this until well after dark. I will mount the front tires on tomorrow, with the rubber that I bought with the rims. They are in poor shape, but should last until I can put new tires on them. Pictures tomorrow of all four rims on.

11/23/04 -- Got the rear rims on , drove them up the street, an heard a strange hummmmmm.... got home and found that my left traction bar was mounted too far back, and was rubbing on the sidewall of the wheel. Did some pretty deep cutting into the sidewall, but I think it will last a couple hundred miles. To test it, I took it out on the street and tried to break them loose...No Can Do! Too much rubber on the ground to break them loose on dry ground. I can break them loose on wet surfaces, but dry ground just pushes me forward, which is EXACTLY what I want!!! Pics tomorrow if the weather clears up.

11/27/04 -- A couple days back, I dropped the trans fluid, since I had a leak that was only getting worse. It has always leaked at the shifter, but was now leaking at the pan, as well. Drained it and let it drip dry for a few days, got some input from the guys at Maverick Forums, and put it back together today. I found a new O-ring, and installed a new trans filter and gasket. But there is a seal at the shifter that needs to be replaced. Nobody can find that for me, so I might just take the car in to a Transmission shop and let them fix it. Shouldn't cost more than $40 or $50. Filled the trans back up, ran it a bit to warm the fluid up, and topped it off. Came back home, adjusted the intermediate bands, and the things shifts on a dime now. I can actually break them loose, a little, on turns. Broke them loose easily at the carwash driveway, where it was damp. Should be able to smoke them at the track. When it is dry, it feels like I am getting to 60 faster since I can floor it and it won't break loose, but keeps 100% traction. Need to run the track to see if my numbers have changed.