11/2/06--I have a couple of projects going on. I am in the process of buying a complete non-power steering system from the gear box all the way to the frame and wheels. Also, been working on finding a distributor cap that will accept the 90 degree HEI-type connections on the top.  Cap is NAPA part #AL162 at $34.

Found one from help from the forum that fits International Scout 304 ci vehicle. It appears the same. I measured it and found this.

The contacts of the stock cap are L-shaped, so apparently the electricity jumps not only across from the tip of the rotor, but also up from the top face of the rotor.

The contacts of the HEI-type cap are just a blade, so the electricity will be able to jump ONLY from the tip, therefore, the closer the tip to the contact, the better (I would guess).

Final test before firing it up. Installed new HEI-type cap and rotor, snapped it all down, loosened distributor, and it rotates freely without hitting the rotor.

As soon as I get wires that will fit this, I will fire it up and confirm that it works. Butch (NAFORD) on the forum has done much of the legwork in finding this cap, and is sending me a set of HEI wires to test this out.

Also, I am ordering a complete manual steering system from Craig Selvey. I sent him $125 money order for the parts and shipping.

11/5/06--Bought a single-belt pulley ($50) from John's Mustangs in Houston, and those plastic caps that fit on top of the front coil springs (2 for $12). Also, yanked out all of the power steering components except for the power valve (the part that has the play that I am trying to eliminate). The valve is what connects the center link to the gear box, and until I have replacement parts, I will try to bind up the valve and use it as a makeshift "manual adapter". I will test drive today after I get a fan belt. At least drive it around the block to see how it works. IF it works.  I at least need to get the car out of the driveway so I can pull the truck in for oil/filter change and rotate tires.

I got a chance to drive it with the power system taken off. It is quite a bit harder to steer (duh!) but is driveable. I will be able to drive it as it is until I get my manual setup. I will drive minimally since I am not sure how strong that PS valve is and I would hate for it to break while I am driving around others.

I am doing an experiment to see what kind of torque it takes to steer this car with PS vs Manual steering. I forgot to get a torque number with the power system on, but I can get a close estimate next time I jack it up and turn it. It was not very much. More importantly, I want to get a percent difference between the manual gear box and the power gear box on a manual system.

With 35 psi in 215/60r15 tires, me in the car, parked in my garage with epoxied floors, it took 33 ft/lbs to turn the wheel in manual with PS box and using the power valve as part of the linkage.

Good thing is the steering really is tighter, already, since the ram and valve are not being relied on for assistance in the steering.

Pic of the engine bay without the power steering stuff. Looks like enough clear space to put in a centrifugal blower...After running it and doing some straight-edge measuring, it appeared that the new water pump pulley was about 1/8" too far back, so I put a lockwasher inside each bolt to move it out a little. It is still just a little bit off, less than 1/16", but I think it will be OK. 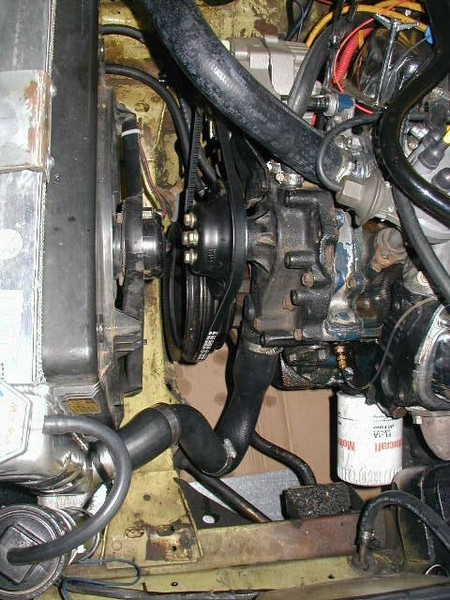 11/11/06--I got some new wires that fit the HEI distributor cap. Butch (NAFORD) who helped me find the cap also sent me some wires. He said I could have them if I paid for shipping, so for less than $9, he sent me THREE complete sets. One set had 120 degree boots for the plugs and 90 degree boots for the cap, so I put them in upside down with the 90 on the plugs. Luckily, these are labeled as 8mm High Temp wires, so that is even better. I might eventually put new 90s on the cap ends and cut the wires to fit more evenly, but for right now, it looks a lot better. 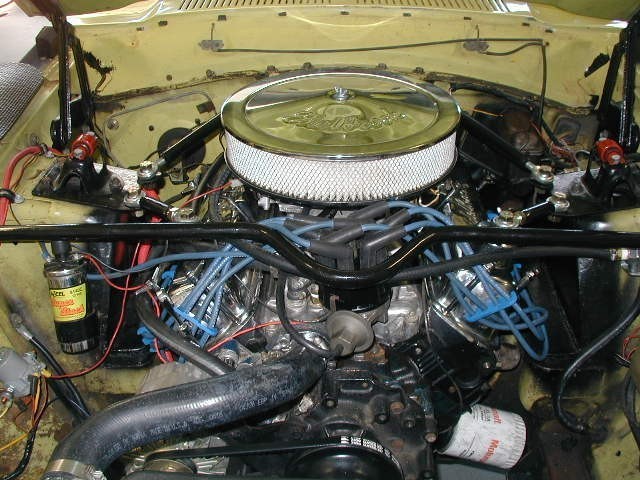 I got confirmation from Craig Selvey that he got my money order for the manual steering system, so that should come in the mail this week. That will give me something to do next weekend.

I also got a piece of aluminum to make a spacer for my alternator, so I can get rid of the homemade one I made out of the deep socket. Might get that in today, but need to cut it to the correct size first.

11/14/06--Met Ed in Houston to pick up some homemade subframe connectors. I am thinking about welding them to a piece of C-shaped iron, then welding them to the frames (after frame has been checked and straightened, as needed). It just seems to me that being able to weld to 3 sides of the frame rather than just around the subframe connector would provide more structural strength. 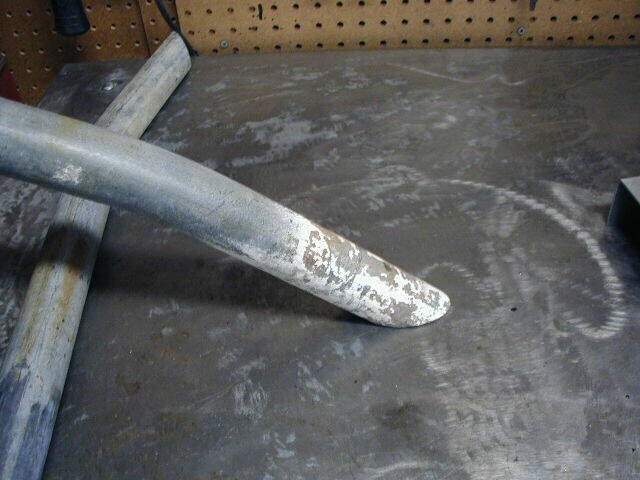 11/22/06--USPS finally got my manual system to me today. Took a while, and I am currently working on replacing the floors in the house, so will not get a chance to install for a while. 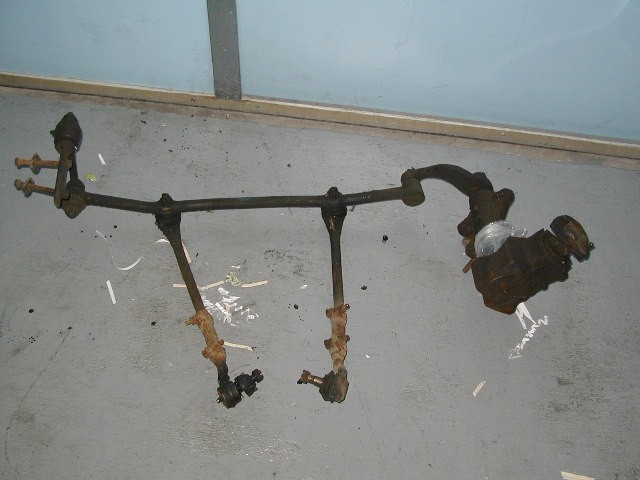 12/1/06--OK, I am cheating by putting this on November, but this entry fits best on this page.

I finished putting the steering system back together, but using the old tie rods and the idler arm from the 74 car. I cleaned out the steering gear box, installed a grease zerk, and filled it back up with grease. After putting it all back together and testing the torque needed to steer while sitting still in the garage, I found the following:

With the power steering hooked up as stock, and the car not moving, it took less than, or close to 1 ft/lb to turn the steering wheel.

With the manual setup and manual box, only 19 ft/lbs.

That is about 42% easier with the manual gear box.

I still need to replace the tie rods, and the idler arm bushing, but other than that, it is back on the ground and driveable.