10/6/06--A guy I met at the Waco meet came in today from Dallas to pick up my stock bench seat for his maverick. He gave me $100 a couple weeks ago. I held onto it until he picked up the seat, in case he backed out at the last minute and wanted his cash back. Well, he loved the seat. So, I got online and FINALLY ordered a new aluminum radiator. It is a Griffin 22X19 aluminum crossflow radiator (Part # GRI-1-26182-X). It is about 2" wider than my stock one, and another 1/2" thicker. Being aluminum, it should cool WAY better than the stock brass one. Others have used the same radiator (in Florida summers) running at 170 degrees on the highway with a 160 thermostat, heating up to 180 MAX at red lights. That is right about where I want to be.

10/13/06--Put the radiator in. Had to fabricate some pretty good brackets. Ended up just making a "cradle" to hold it from the bottom, then a chunk over the top to hold it down, and prevent side to side movement. Also had to cut a pretty good bit out of the front clip to let the radiator fit further forward. This allowed me to mount the fan on the radiator, and have plenty of clearance between the fan and the water pump pulley. 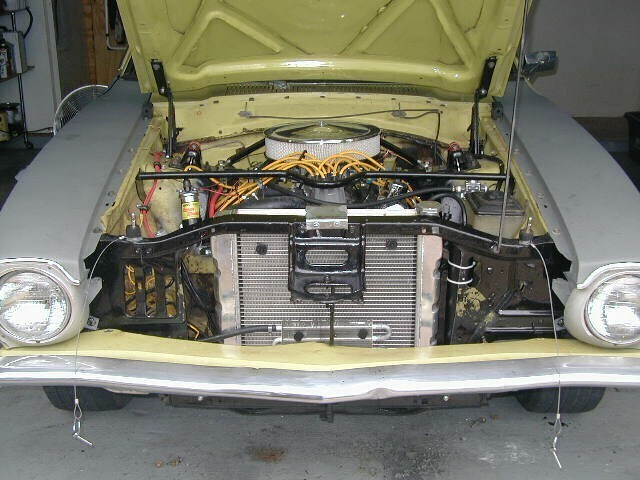 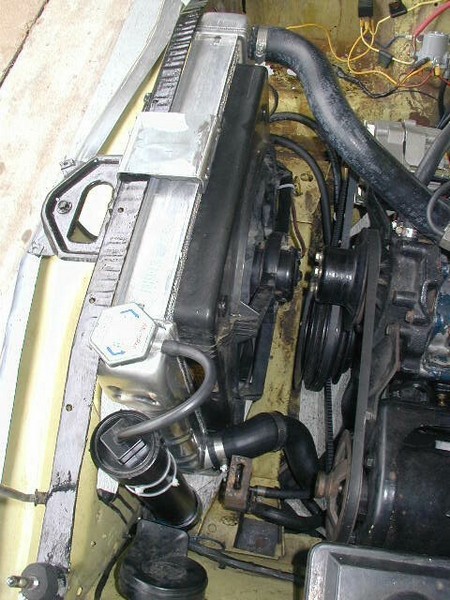 10/14/06--Got the radiator finished up and put on the trans cooler with new lines and connections (one was leaking before this project). I had to do some fabbing on the lower radiator hose. It was a little too short, too small in diameter at one end, and had too little of an angle to fit onto the new radiator, and I couldn't find one to match at the parts stores. After thinking about it a while, I decided to buy a different hose with the correct sized end and angle, cut the end off, put a short piece of metal tubing in the end of the stock hose to stiffen it up, then slid the new angled piece over it and clamped it on. In the pic, you can see the hose clamp about 6" back from the radiator where it connects and becomes smaller diameter.

I ran the car for about 20 minutes in the garage (with the garage door open...) and it got up to 170, then the thermostat opened and it dropped down to about 165 and stayed there. This may be too cool...But better than getting too hot. The garage got quite hot, too, from the exhaust and engine heat. It was 85 outside, probably 95 in the garage. So those are good numbers. I might need to buy a thermostatic switch to switch the fan on and off as the temp rises and falls to keep in closer to the 170-180 area.

10/20/06--A couple days ago, I decided to fix the header-burning-the-plug-boots problem, permanently.... I have the header on the driver side pulled off, and got a set of shorty headers from a late model mustang from Ed Davis. These have 4 separate flanges, one for each tube. When I cut the tubes off, I noticed that the flanges are cast on one side and machined flat on the other, plus there is a huge weld inside the hole where the tubes were welded in. It would take WAY too much work to grind out the welds, and even more work (with tools I do not have here) to machine the cast side. Otherwise, if I try to grind the cast side flat, I will more than likely end up with leaks all over the place.

"Old Guy" on the Forum has a flange left over from a Hedman set of headers, and is going to send it out to me for use as a spacer. Until then, weather is PERFECT for racing, but I have the car torn down. I guess it doesn't matter...I had three burned out plug boots that were shorting to the header. If I would have raced on them, I wouldn't have gotten very good numbers. Maybe next weekend...

10/28/06--OK, this was a fun job. I have been messing with the headers for a couple days. Yesterday morning, I couldn't sleep, so at 3am, I went out to work on the car. I have the exhaust unhooked on the driver side, the headers are loose and just flopping around in there, and I cannot get the longer header studs to get started because they hit the header tubes forcing them to enter the hole at an angle. I drove around looking for smaller headed bolts, but they only make them short, and they will not fit with my spacer. I finally ended up jacking up the motor, and taking the motor mount completely off on the driver side for more clearance. Took the header all the way out, and took my metal-working hammers and pounded the inner side of each of the header tubes to have a hollowed out space for the bolts to swing into to clear the way into the holes at a 90 degree angle.

This was not enough pounding to significantly reduce exhaust flow, especially with as few horsepower as I have right now. Once I got them back up into the engine bay, I found out that in order to swap spark plugs or wires/boots on the DRIVER SIDE ONLY, these are the steps I need to follow from now on...

1. Jack the car up as high as I can and set it on jack stands.  Disconnect exhaust pipe.

5. Rotate the header so the collector is near the ground, and the tubes rotate up and to the right clearing away from the plugs. At this point, you can remove the plug boots, use "the tool" to remove the plugs, and do whatever repair/replacement you are trying to do. The headers will rotate around and move quite a bit clearing the way for whatever you need to get at.

6. To reassemble: put in the front header bolt, then lift the rear of the header to line up the last header bolt. Then remove the front, install your spacer and gasket(s), and reinstall the front bolt. The header may need to be wiggled a little while all the gaskets and spacer are shimmied into place. Might also have to drop the engine a little to make them fit.

7. Install all the trailing-side header bolts first (the ones that had the grooves pounded in to clear). Then start the forward-facing ones.

8. Tighten all the trailing bolts a little at a time. Maybe 3 turns each, then move to the next one. Once they are almost tight, catch up with them on the leading-side bolts.

9. When they all seem pretty snug, then tighten them all down, going over each of them a couple of times. As you tighten some others may feel like they have more to go as everything seats. In the end, they will all feel pretty tight.

10. After running it to running temp a couple of times, and periodically afterwards, retorque them all.

I learned all of this with trial and error, and decided to document it here so that in the future, I don't have to waste so much time messing around with them.

I ended up using the free flange that "Old Guy" gave me, along with a single 6-layer aluminum Percy Seal-4-Good gasket split 3 layers on each side of the spacer. I couldn't fit a full 6-layer gasket on each side without putting the headers too far out and hitting the shock towers. I probably would not have been able to get the header bolts started either.

Runs great now, except that I have a minor miss somewhere that I need to find. Causes a hesitation at takeoff, and periodic loss of one cylinder while cruising. Just annoying, but needs to be fixed.

Also, in test driving, I got to put 30-40 miles on my new radiator. The weather has cooled to the low 70s, so this may change a little in the summer, but in town, it drove at about 165. On the highway going a around 70 mph for about 20-25 miles at 3300rpm, it got up to 182 and hovered around 180. When I got off the freeway and resumed city driving, it ran around 175-180. I am still running the 160 Hi-Flow Be Cool thermostat, and may just keep it, as it should help it run cooler in the summer. I still think I might need to put a thermostatic switch on my fan so it does not come on until 175-180 degrees. That should help it warm up faster and run warmer in town.

UPDATE--I went back out and started to wiggle my plug wires around. One of them just popped off the distributor. THAT would explain my miss and hesitation (insert slap-on-the-head smiley here).