5/1/07--I have been debating for a few weeks about putting the subframe connectors on (courtesy of Ed Davis) before I run the car with slicks/1.7 roller rockers/caltracs. I can see the floor pan portion of the unibody frame getting twisted over time. Some guys on the forum said NO, and get the body straightened first (quotes start at $500 and go up depending on how much work is needed), some said YES and take them off when time to straighten the frame.

I chose to put them on and started them this afternoon. I have welded the front most of the way on the driver side, and the inside portion of the rear driver side, but I need to remove the caltrac setup so that I can weld the outside portion of the rear subframe mount. I will try to weld the passenger side one on similarly, then remove the springs, and weld the inside when I get around to it, maybe this weekend if I have some time.

The gasless wire-feed welder isn't the "best" tool for this job. It is requiring a lot of wire and many layers and grinding in between. A welding rod would have been a better choice.

5/3/07--I finished welding up the subframe connectors. I had to take the Caltracs off so I could weld the inside rear portions of the rear subframe connector mount. There is plenty of room for accessing the Caltrac bolts. Next job is to do turndowns after the glasspacks and put a mount for them so they aren't just hanging there. Also, John called yesterday and said he will have the driver seat bracket out and mailed to me this weekend...

I will wait a few weeks and let these welds and frames rust up a little, brush off the surface rust, and POR-15 goes on. It tends to bond better with semi-rusted surfaces, sorta like the floorpan on the picture below. 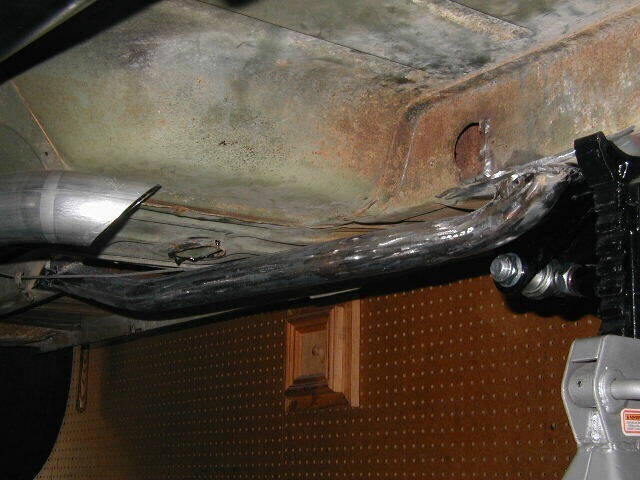 5/5/07--Went to Fun Ford Weekend and met with a small group of Maverick owners. We had to leave early, like around 2pm. I noticed Anna was getting sunburned and she began suggesting that she we hot and needed to find shade. There was not much, and she wanted to sit in the car, and I suggested that we go home before she gets too sunburned. Got home and cut the exhaust pipes up and added straight length of pipe and then a downturn just past the line where the door closes to the body. That is supposed to be legal here, and I always liked the look of downturns (no exhaust pipes visible outside the vehicle). The glasspacks are not installed parallel, so I will try to bend the pipes a bit to make them both line up then put on the hangers.

5/26/07--I have done a bit since last updated. I cut the exhaust and added some length then downturns so it is legal. I don't like the way it looks and have not permanently mounted it. I will likely swap it for a dual flowmaster setup in the next few weeks before I have to have it inspected. I will probably take the exhaust dumps off, since I now know that the car will never run better or faster with them open. This small engine needs the scavenging effects of an exhaust system to reach it's peak performance.

Yesterday I took the bumpers off and sold them, and will put the straight and rust-free replacements on soon. I also FINALLY took the carpet out of the box and laid it on the floor to let it settle and lose the creases from being in the box for so long. This forces me to get on to painting the interior body panels and putting the car back together. I also found the driver seat brackets on the front patio last night, so nothing is stopping me from having this on the road really soon.

Also last week, I put POR-15 inside the external body panels behind the inside kickpanels, over the wheel tubs, and toward the trunk. When this car was put together, they painted the outside of the car but left the inside just bare metal. It is not rusty, but is "seasoned" so it is a perfect candidate for POR-15 application. This will allow me to rest assured that the body will not start to rust from the inside...

Recent purchases include a straight rear bumper for $100 from19Maverick72 in Humble, and those sway bar bushings for $10. I sold the two dented bumpers for $50 each so I will not adjust the price. Also, the brackets from wagesofsin were trades for front bumper brackets.

5/28/07--Memorial Day--It is raining today. Off and on, keeping it nice and humid, not the best weather for painting, but I have the panels on the floor and am painting with Satin Black Krylon spray paint. You can still see the scratches, scuffs, and dryrotted areas, but at least it is all one color. Hopefully, the Krylon will protect it from further deterioration and when it comes time to paint the car and cover the seats, I may have these covered in leather or vinyl. 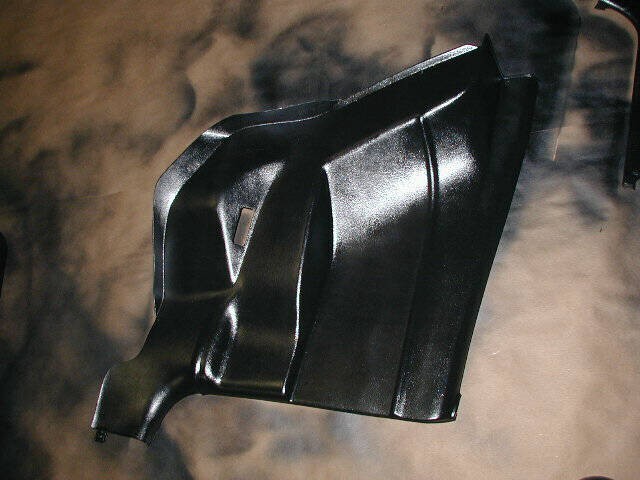