6/5/07--The interior is still torn apart. Partially because it is getting too hot to work outside on it and partially because there are many little steps that I need to take in the process of putting it all back together. After doing some research, I have decided to put down a 1/8" thick layer of bedliner along then entire interior of the floorpans and trunk. This will act as an insulation against sound and heat and will provide a little "sponginess" to the floor as I put down the carpet. Then, depending on how if feels with carpet installed, I might put a layer of jute down, but there is already jute on the bottom of the carpet so I may not need that. Then I need to lay the carpet, put down the painted interior panels and seat belts, remount my seats, and I am ready to go.

6/16/07--FINALLY got around to installing some carpet. Also, I have two Flowmaster Super 44s on order. They accidentally got me Super 40 which is 5" thick yesterday, and today I will swap out for the 44s, which are only 4" thick by 10" long. I will do a straight back and dump before the axle setup.

Woke up early, like around 3:30 am and drove to the store and got a soda. Then came home and put the car on the dollies, dropped the driveshaft (so I could get to the shifter and shifter mounting bolts more easily), swapped out the ET Street slick tires for my BFG T/A street tires, put the carpet on the floor to settle a bit, then installed my two "new" small bumpers (straight, but need to be rechromed), then hit the carpet. Finished the driver side, and found out that I have a seat bracket on the inner passenger side that is made for the later cars with the catalytic converter hump. I will take a set of 67 Mustang brackets that have a shoe-shaped spacer on them, cut the tack weld, and run the bolt through the bracket and shoe-spacer and it should be perfect.

Also, it appears that the carpet was molded over a cat-hump floor because there is a little "slop" on the passenger side. Otherwise, I have the driver side done, but I might take the seat belt back out again and paint it to match the kickpanels.

Also running a layer of jute over the top of the heat-proof layer all the way along the floor, and behind the back seat, and into the trunk. Will eventually prep the trunk and line it with jute also. 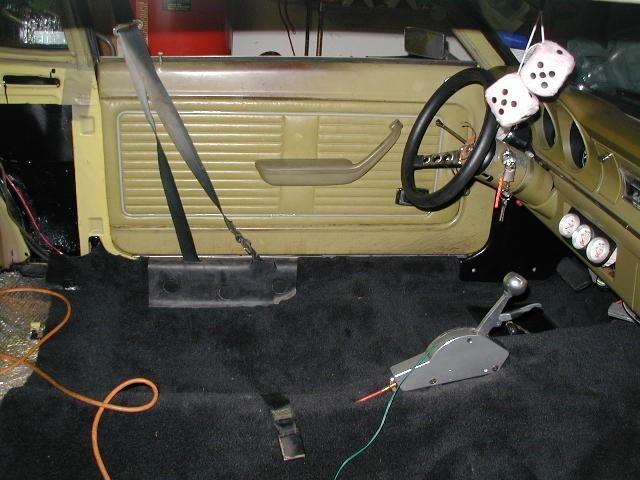 Sound clips of Super 44s mounted temporarily just after the header collector, no other pipe. Inside and outside the car.

6/30/07--FINALLY got around to installing the exhaust system. It quieted down a little with the mufflers located out back near the rear axle. In fact, it is almost silent at 2500 rpms on the highway (yeah, right...). It has a really mean sound when you hit 4500 rpms, which I can only describe a changing from a low growling roar to a cross between a panther roar and fingernails being scraped against a chalkboard...It kinda screams and hisses and sounds REALLY MEAN!

Also FINALLY (lots of FINALLYs this month, even with work on the house...) got the non-column shift steering column installed, and got my turn signals to work when the wheel is straight (been a problem for a few months), and fixed the horn so it doesn't go off when I turn the wheel. All things that have piled up on me since I haven't been driving it and needed to be fixed before inspection.

I also FINALLY got to drive the car with the 1.7 roller rockers, Cal-Tracs, and subframe connectors installed (not with the smaller slick wheels, though). It really has gotten a bit more ooomph! It was a bit scary actually when I first gunned it and all the components did what they were supposed to do. This is going to be a fun car at the track next time I go...

Current issues, mostly minor, are the seasonal "burp" when I gun it from needing the metering rods changed to match the summer fuel, need to finish juting the trunk and rear quarter panels, put the back "seat" back in, put the passenger seat back in (going to take a little work), driver seat intermediate bracket needs to be cut down so the seat sits a little lower, and I might just relocate the fuel pump to a more solid piece of metal to quiet it down. I am getting sick of how loud it is.

This will probably wrap it up for the month. I will have to estimate on price adjustments because most of the work done this month were tradeouts and not new purchases...I think I will just add $200 for the mufflers and consider the installation a tradeout (been done twice before).

Hit link to hear the Super 44s running in the car... 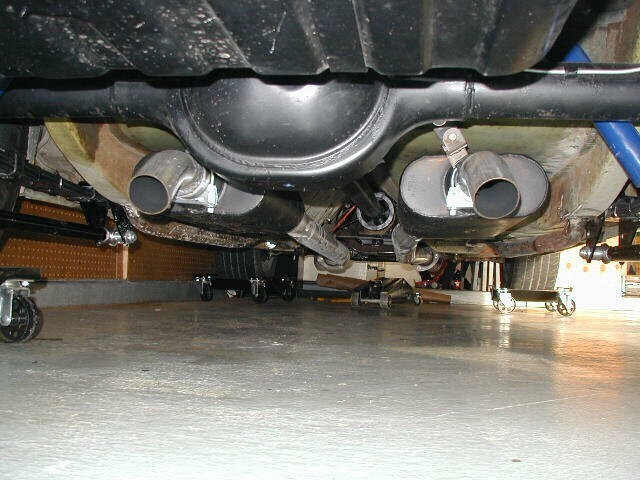