4/5/07--Been doing very little and been documenting even less.

BUT--yesterday, I took the slicks and rims to a used tire shop, had all the tires removed from the rims, put dish soap all over the inside of the slicks (seals the soft porous rubber so it won't leak as quickly, supposed to be used with inner tubes, but they are $60 each, and they can run as tubeless if you don't mind the air leaking out of them). I found that the steel 14" rims were different widths, and the wider one was rusty enough that the tire guy was afraid to mount a tire on it. It was rusting around the lip that seals the tire to the rim. Guy only charged me $28. Then stopped at O'Reilly and bought 10 open ended lug nuts that will fit these rims.

Posted a poll on the forum asking if I should clean up and polish the rims, or spray paint them a semi-gloss black. Currently, many more suggest that I clean and polish them rather than paint them black.

Today, I took a half day off (will make it up when it rains this weekend, being a 4 day weekend anyway, I have plenty of time and wanted to use the cool sunny day today to work on the car). I put on the Crane 1.7 roller rockers that Butch (NAFORD302) traded me for a used laptop. Then I took the distributor out and rotated the heater hose hardware that has the thermostat temperature sending unit on it to trigger the fan relay, ran new heater hoses, put the distributor back in, and fired it up. It ran fine, but smelled really bad, worse than usual, and burned my eyes. Making a VERY long story short, I ended up finding that I have been running the car with the 6 and 7 plug wires switched, causing it to have a really nice sounding lope, but smelling bad (1/4 of the gas was just coming out the exhaust without burning). It now runs much less stinkier, and should have picked up 25% more horsepower (from the corrected crossed plug wires), plus another 10% (seems like a high estimate) from the roller rockers, and should run cooler (less friction on the rockers), and I now have increased my lift from .448/.472 to approximately .478/.502.

I have the slicks mounted and aired up to 25psi, and will keep an eye on them and see how long they hold pressure. They actually run at 6 to 20 psi on the track, the 25psi is just to test it out and calculate how often I need to air them up.

Haven't been able to drive the car since I have no seats. But, put that steel rim on the floor for a seat and drove it around the block with the slicks on just to see how they feel...they chirp really bad around corners, which I don't get from the BFG T/A Radials, I assume due to the little "knobs" flexing and releasing some of that pressure. The slicks don't "give" and you can really feel the difference. The slicks will eventually be in the trunk and applied only at the track, once I figure out how long they will hold air.

4/14/07--Still waiting on that front seat bracket. Car is put on hold until I get seats. Carpet still in the box, slicks mounted and holding air well, engine running very smoothly, if not a little rich (need to rejet the carb to summer fuel).

Since I swapped the single-plane Torker 289 intake in replacing the dual-plane Performer at the same time as I added the GT40P heads and headers, I have no idea how much improvement I got from the dual-to-single plane swap. Simon (stmanser on the forum) is running the Performer and wants to swap to a single plane before deciding on a new manifold (leaning toward the RPM top-end package). He visits the track regularly and keeps pretty good record of his numbers. So I sent him my second Torker to swap out and experiment with. He paid for shipping only, and will see if he wants to go with the RPM or a single plane setup. Once he decides, he can ship the Torker back to me, or maybe we will work a deal out and he can keep it, if that is the direction he wants to go. Really depends on where I end up going with mine. If I ever get to rebuild, I am currently leaning toward the 6-71 blower on a 331 build, and I won't need the Torker intake, and it will be up for sale.

It is almost racing season, the shows and swap meets are beginning, and I am grounded without seats. I might just have to invest in some nice new seats if I don't get a driver side set of rails soon...

4/21/07--Alot has happened in the past few days. I was watching the forum and Shadowmaster put up some New In Box Caltracs for sale, $300 and he put his car up for sale. He had promised me the front bumper so I quickly called him and made sure I still had access to it. He said "sure, but come get it before I sell car." So Anna and I loaded up and headed to Crosby, and paid for the bumper and Caltracs. The bumper is straight with only surface rust underneath, and most of the chrome still intact.

Today I pulled the entire rear suspension off, took the leaf springs to Craig at Advance, borrowed his press to get the front spring bushing outs, pressed in the aluminum bushing for the Caltracs, and installed the Caltracs and everything else. In the process, I swapped out the driver side U-bolts for the heavy-duty ones I bought a last year when I did the drop on the passenger side to level out the lean.

Then, while cleaning up, the Fed-Ex guy stopped in with my some 67 mustang seat brackets, so tomorrow I will see how those fit and maybe get my seats and carpet started.

The only issue I encountered was that the exhaust pipes were right where the Caltracs needed to be, so I am currently running open-headers again. I called the inspection place and they told me I can do downturns after the mufflers as long as they exit behind the line the door makes when it closes to the body. So I threw them into the back of the truck and took them back to Craig and asked him to cut them at an angle so that I can drive it until I can fix it correctly. I always wanted downturns but didn't think it was legal...now I know. I think not seeing the exhaust exit the car is the cleanest way to install an exhaust.

Tomorrow, I will try to reinstall the mufflers and maybe get started on the seats... 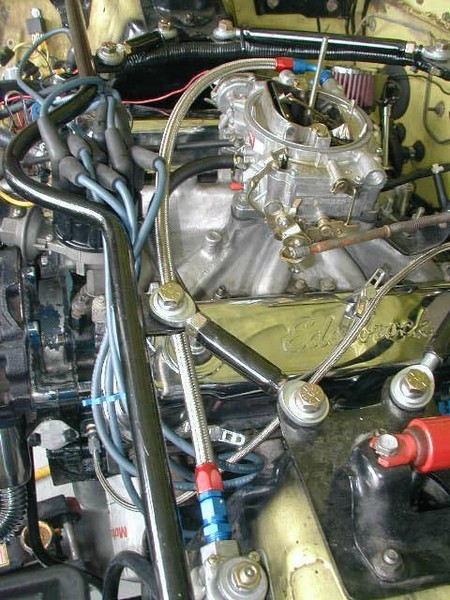 1) this stuff will cut the crap out of you, even if you are careful!

2) rotary or dremel cut-off tool does not work too well as it heats the rubber inner hose, makes it expand and flares out the braided stainless, and it will not fit in the fitting.

3) a cable cutting tool is a MUST. It cuts clean and straight, and leaves the braids intact.

4) electrical tape is a MUST. Wrap 2-3 wraps very tightly and cut the hose through the tape. Once the hose is about halfway in, peel off as much of the tape as you can so it doesn't hang out of the fitting when done.

5) 30-weight is a MUST. I dabbed oil inside the fitting, and dipped the tip of the hose (still wrapped in tape) to make it go together smoothly.

6) finally, work gloves are...a MUST. minimizes puncture wounds, also gives you a good grip on the parts as you feed them in.

I used crescent wrench with electric tape on both teeth to minimize scratching the fittings.

4/30/07--Well, the MT slicks are holding air. Still at 24psi, originally put in 25psi and they are still sitting fine. Also finally got a driver seat installed, but used seat tracks from an old mustang and they don't fit "quite" right. They will work until I get real Maverick tracks and install them correctly. Then the carpet goes in...