4/2/10 (Good Friday)--Lots of project progress today. I got that serpentine setup a couple weeks back and nailed down the alternator I wanted to use. It is a 130 Amp 3G (3rd Generation Ford) alternator. It requires a lot of upgrades, but gets the car a bit more modern.

First thing I found is that the alternator wires stick UP when mounted, so I had to take the back half off and rotate it ("clock" it) so the wires and connections came out the side right near the starter solenoid.

Next issue--the 3G alternator will not fit in the stock bracket, so I had to do a little bit of grinding to make it clear. There are three points on the back of the alternator and one hit the bracket, but grinding away at one of the inside edges cleared that up.

Then when that point cleared, the bolt area rubbed, so I did a little grinding there too. 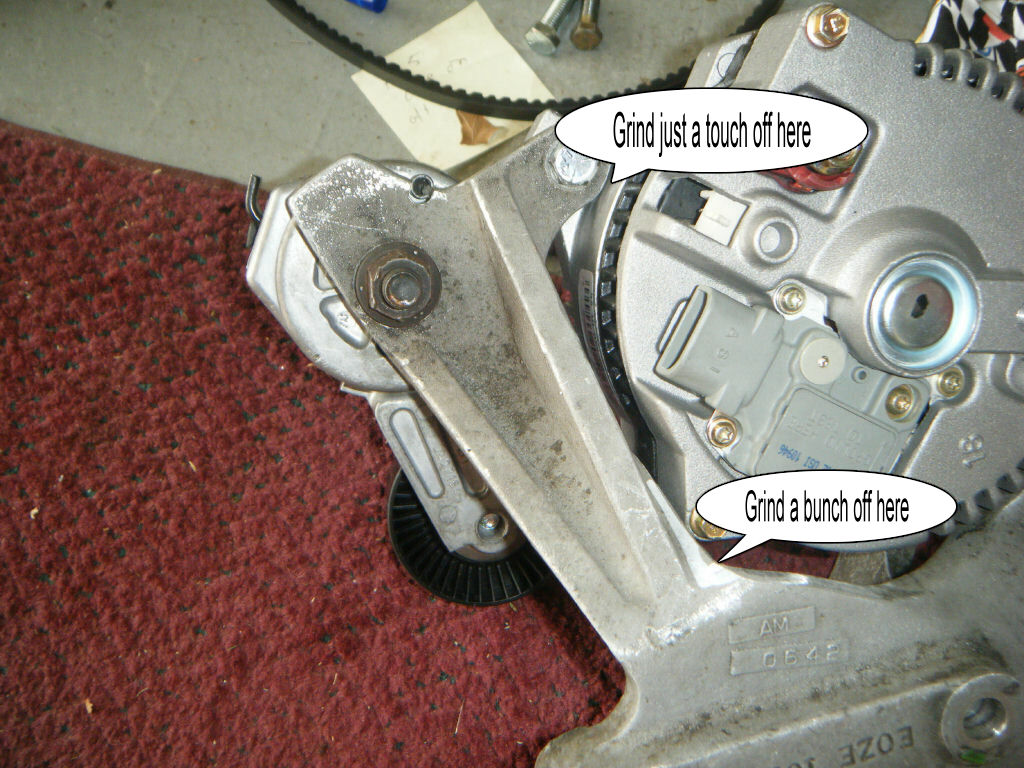 Then I had to buy 6 gauge wire to go from the alternator hot to the battery post. The stuff I have on now is 8 gauge, and is supposedly too thin, and may melt or catch on fire. I don't want none of that. So 6 gauge it is, with an inline, re-settable 150 Amp fuse, which I will most likely mount to the battery box. I bought 20 feet of 3/8" fuel line to surround the 6 gauge wire and insulate it so it doesn't ever get rubbed through and short out.

Next issue. I hook everything up and try to run my belt with just the water pump, alternator, and tensioner, but there ended up not being any belt tension on the water pump, so I went ahead and installed the A/C compressor (not hooked up) and used it as an extra pulley to put tension on everything.

Then I found out that the tensioner ends up ON the upper radiator hose!!! DOH!

I am done for the day. I will buy another chrome flexible hose from ebay and install it over the top of the belt. 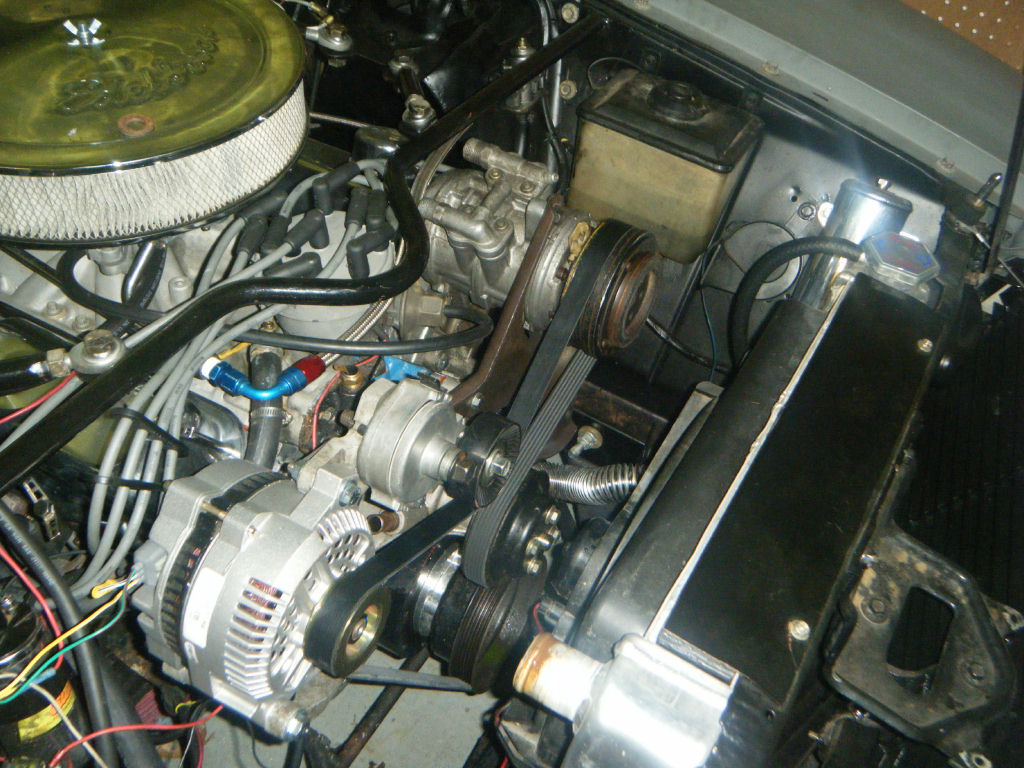 4/30/10--On a very sad note, I lost my copilot this week. Tuesday has been unable to keep food down for a little over a week. We tried various foods, and she just refused to eat. Finally, on Friday, I got her to eat some boiled chicken and rice, and she was able to keep it down and we thought she would pull through, but about 8 hours later, when she should have pretty much been done digesting it, it came back up. We tried through the weekend to help her keep food down, but she couldn't. We had to put her down on Monday morning...Rest in Peace, Love... 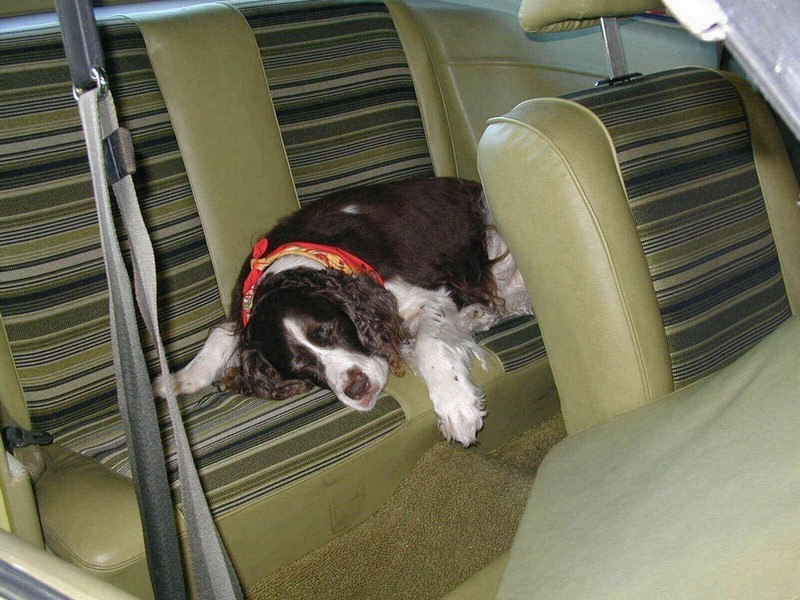 To wrap up the month, I finally got some motivation to finish the car on Saturday. Ed Davis came over to help me pull out the interior on the passenger side to run the #2 welding cable from the alternator, to the shock tower where I mounted a 150A breaker, then through the firewall, under the door sill, and to the kill switch, then to the battery. I found some rubber boots to fit over all the brass lugs at John Deere, part number M46449. They fit just fine over the #2 and the lug, covering all the exposed lug and covering the bolts that hold them down. I also covered the entire cable with red 1/2" ID heater hose, for extra insulation to protect against heat and friction.

The thru-hull connection is from the boat store, and fits firmly around the heater hose. It is PVC so it provides further protection from abrasion. I cut off all the extra material that was sticking out. About 4 inches worth, so it is pretty much flush to the firewall inside and out. 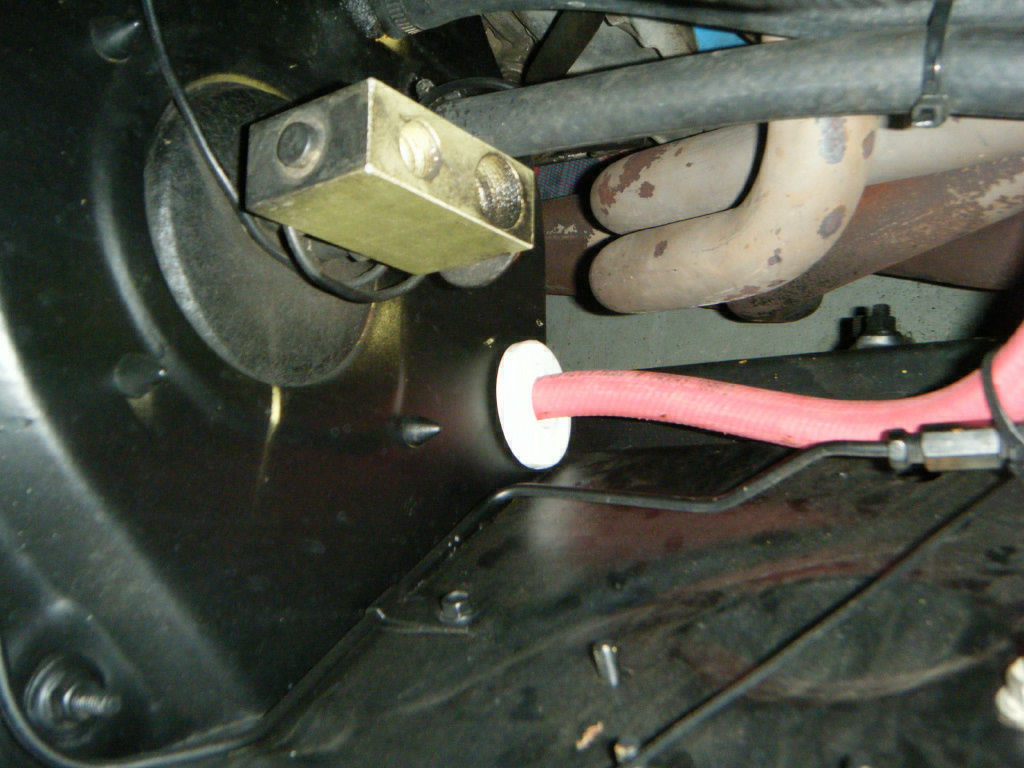 The A/C compressor is not hooked up, but it is there for an extra bend in the belt to make it loop around the water pump enough to spin it. Eventually, I will put A/C in the car, so it doesn't hurt to add it now, and swap out the compressor when I get to that point. 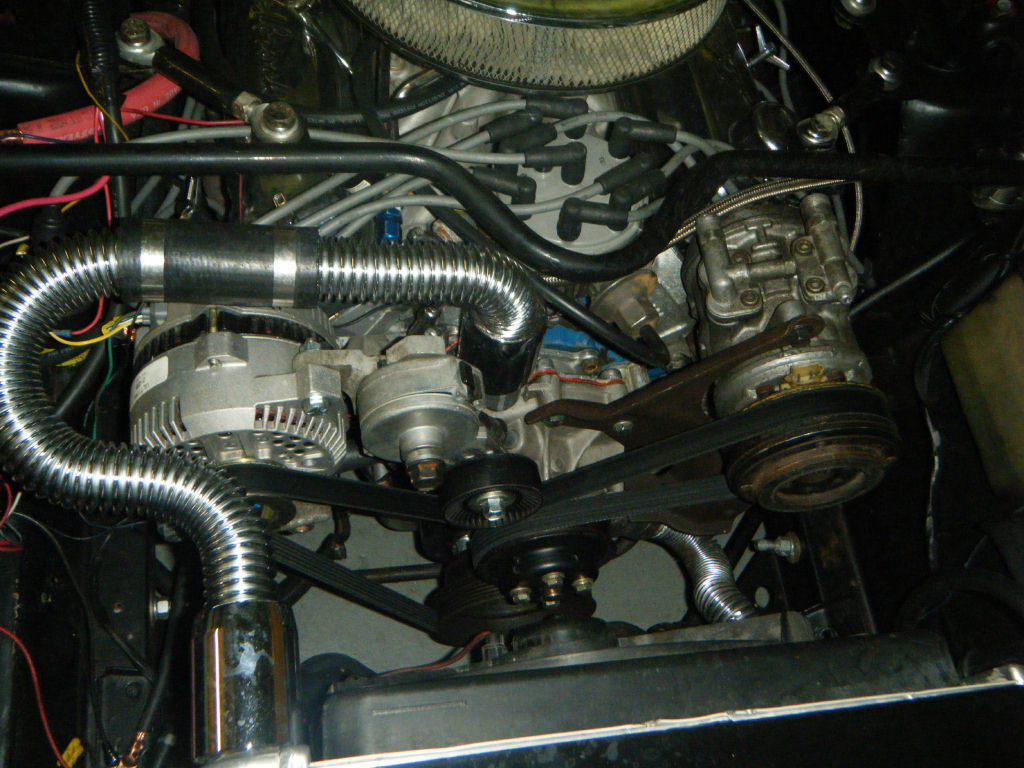 Most importantly, I can spin the engine up to 6500+ rpms and it no longer tosses the belt!!!