6/6/08--Finally got my Professional Products harmonic balancer ($60 from ebay) in the mail this week, and today I got some time after work to put it on. It did solve the vibration, as far as I can tell, but I have only run it in the garage in neutral. Revved it up to 3500 and it feels like it is gone.

Then the problems started.

First, I found that I should use a spacer with this between the balancer and the pulleys. But, I did some measuring, and found that if I put my 3-groove pulley in there, the front pulley lines up with everything, but the other two grooves sit back almost an inch closer to the block. That front pulley is larger in diameter, for the A/C, but I figured it shouldn't hurt to have the alternator and water pumps spinning a bit quicker, even if it does rob me of a horse or two from the stolen torque on the crank. But when I mounted the pulley, the inner one only had about .025" clearance between the lip of the pulley and a bump on the cast iron water pump. The instructions said you might need to knock off some bumps and grooves on the cast pump, if you have clearance issues. 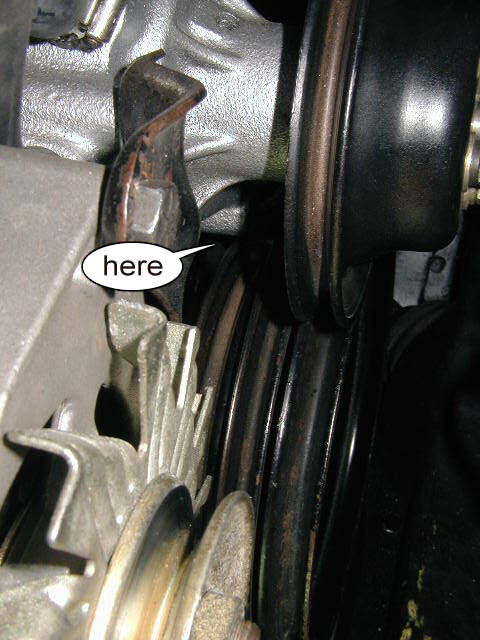 So I pulled off the pulleys and started to grind on that corner and gave it about 1/8" clearance. This is the back side of a bolt hole which is threaded about halfway to this point. The bolt holds a thin metal divider between the timing cover and water pump pulley. So this has no effect on water flow, bolt holes, etc, if I don't go too deep.

Second, I got it all put together and put the belt on, started it up again, and heard a very faint grinding squeaking noise. Apparently, there was another piece of cast material under the water pump just barely touching the balancer, enough to just scratch off a line of paint and make a little noise. 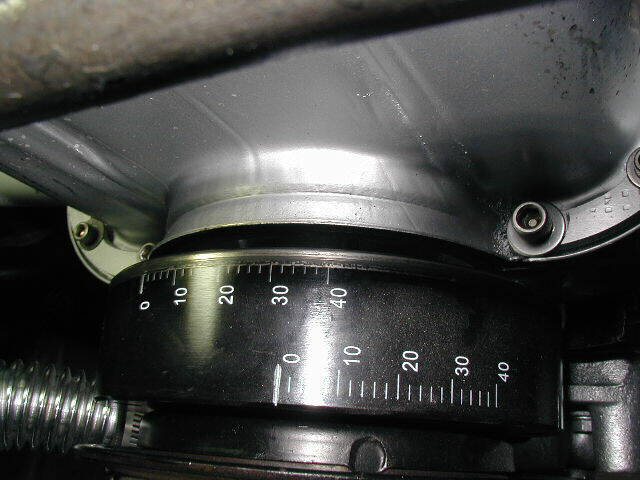 So I head to Autozone to buy a harmonic balancer puller. Get home, open it up, start to use it, and look up on the wall and I already had one!!!

Got the balancer off and started to grind away on where the cast pump housing connects to the aluminum timing cover. There is a bit of gasket sticking out there, and a couple of cast lips hanging off the edges. A bit of grinding to smooth those out, then a bit more just for clearance, and ready to reassemble. 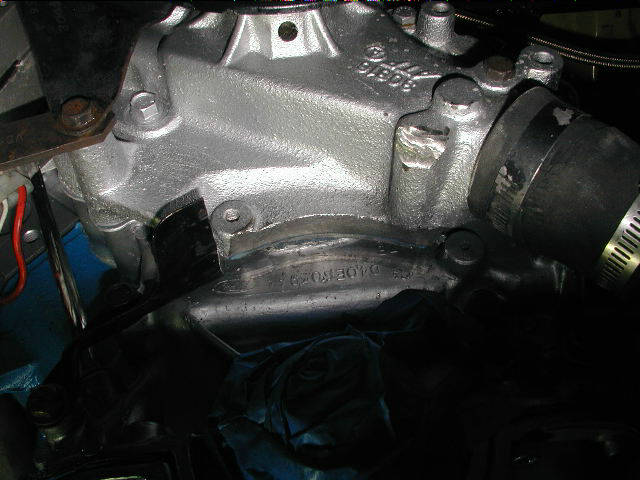 You can also see that edge I ground into that first bump to the right, near the black hose. The part that was scratching the balancer was near the bottom of this picture (we are looking from upside down under the car, at the bottom of the water pump). The now-shiny curved area with the blue gasket material slightly exposed is where I was grinding. Beforehand, it was rough like the rest of that part, and either the roughness or a lip was rubbing the balancer.

Got it all back together AGAIN, and wiped a thin layer of white lithium grease on a spot on the balancer just to make sure it wasn't still rubbing somewhere, and after starting it up for a few seconds, the grease was not bothered. Started it up again, let it run a bit to get warm, and took one last look around for scratches or anything else that could cause a problem, and all went well.

None of this would have happened if I had had an non-cast aftermarket water pump, and if I bought the spacer and kept the pulley out where it belongs.