12/16/09--Didn't do anything today, but finally sat in front of the computer to update the website. During the month, so far, we took the car for a 90 miles-each-way trip to Dayton for Elisa's birthday (Anna's cousin) and while there, I did a big burnout with Jackson (our nephew) in the car. Tossed the fan belt and drove home a mile or so with no water pump. It got hot, and spewed about 3/4 gallon of water before I got it back to the grandparents' house to wrench on it and get it back on. Still ran fine afterwards for the trip home, but just before we got home, I pulled it down to second gear and passed some guy at about 80 mph, and when we pulled back in to cruising speed, the on-going drivetrain vibration was way worse, and the car was running like crap. Got it home and garaged it til the weather got better, then while messing with it, I found a dead cylinder. It ended up being a rocker on the #5 intake valve had walked off and unthreaded (maybe due to the vibration?). So I tested all the rockers and found 1 more really loose, and another just a bit loose, all intakes, all on driver side of the car (#4, 5, and 6). No serious damage, but you can see that the rocker was loose a while and walked back and forth across the valve nicking the rocker a little, but not damaging any of the normal contact patches. The next day, I took all the rockers off, used gun-scrubber on all the threads, and reassembled them with lock-tite. I have only driven it a couple times since, for a total of about 10 miles, and so far it seems to be holding up.

I have finally found the source of my vibration. It ended up being the rear u-joint. The one I had on there, that O'Reilly's computer spit out, had the same sized caps all around, but the one the Maverick needed has larger caps on the yoke end. So my joints were moving around and causing that harmonic vibration. The small caps measure at 1.063" and the larger caps are 1.125", so I bought 2 u-joints and swapped caps so the correct sized caps are now on the car. There is likely a u-joint that comes with the correct caps, I just didn't do enough research to find it. No most of the noise and vibration is gone. There is just a little left, but it is bearable now. Not sure where it is coming from but possibly a combination of spooled rearend and exhaust dumping at the axle.

On Sunday the 13th, Drew Pittman (facelessnumber off the forum) was in Houston for work and asked if he could come in and meet us, so we called Ed Davis and had a prime rib cooked up, and had a mini-mini-meet. Ed brought his car and we took rides in both. My master cylinder was going out over the past week, and I was needing to pump the brakes before they would work at times. Well when I took Ed for a ride, I had to pump twice at the beginning of the trip (5 miles round trip just to show off the car) and when we pulled back to the house, I was having to pump 4 times. Then later when I took Drew for a ride, it started with 4 pumps and then when we pulled back into the garage, it was pretty much completely dead, and I was pumping continuously to keep from hitting the refrigerator in the garage when I stopped. So I had to order a new master cylinder. Ended up getting a new aftermarket one, instead of ANOTHER rebuild from O'Reilly. Top of the line is pretty much Wilwood, so I got a Wilwood 260-8555-P (P=polished) from JEGS. Haven't received it yet, but that should be the last master cylinder I need to buy. It better be, for $250!

A pic of the two cars attending the dinner on Sunday... 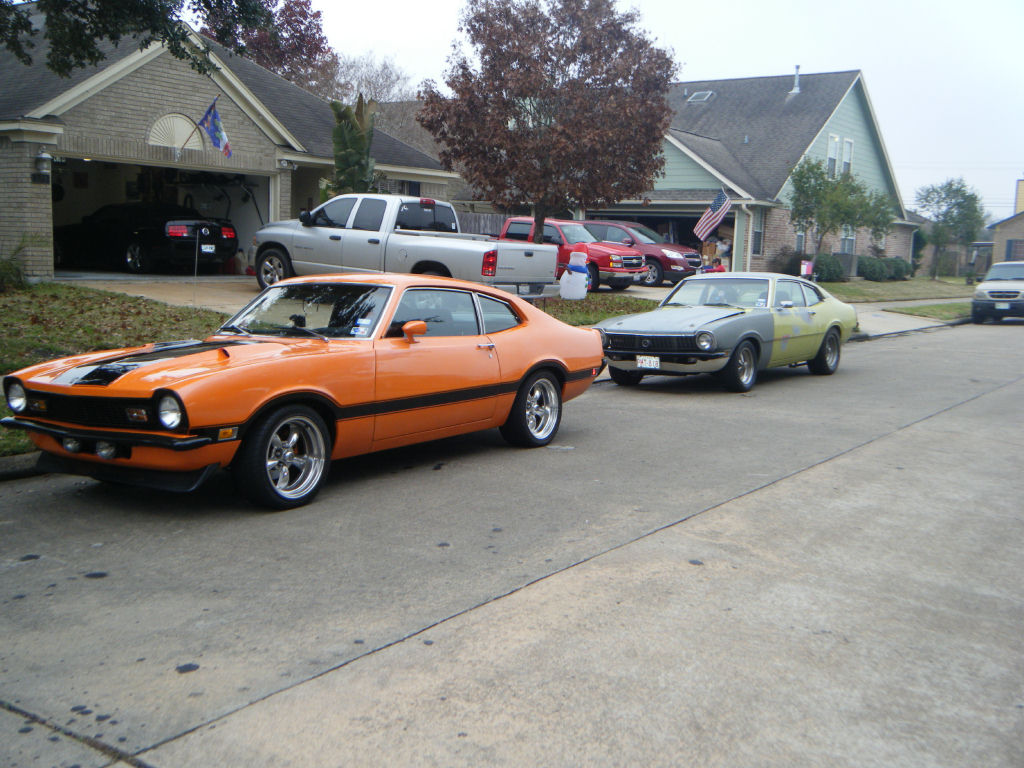 12/21/09--Got the new master cylinder in a couple days back and finally got time to install it today. I removed ALL the brake lines from the proportioning valve up, and replaced them with new lines, and not so much of them. Instead of the mess I had with the stock lines and some of the other twists and curves in them, I put mostly straight shots from point A-to-B. 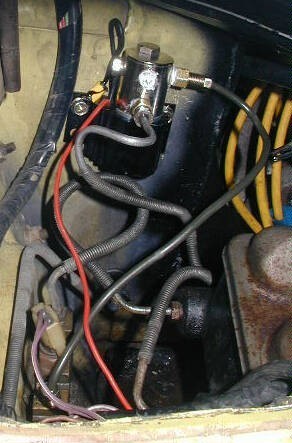 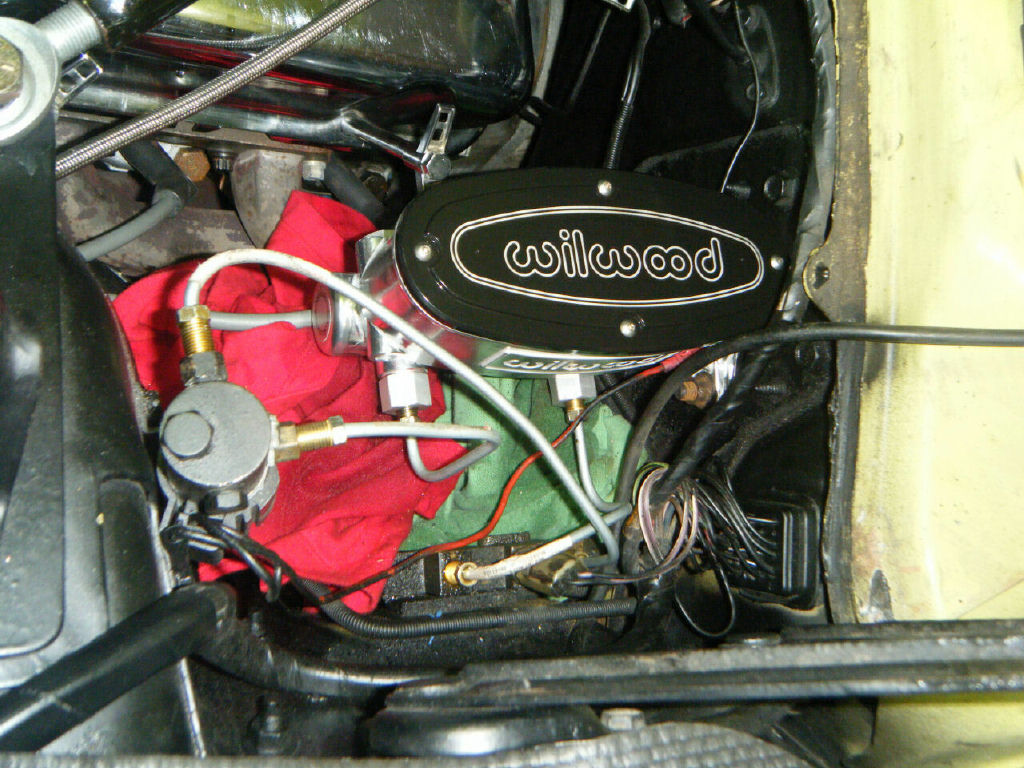 This thing will stop on a dime and it is TIGHT! Completely different braking than the old stock rebuild jobbie.

While I was doing this, I went ahead and ran clean fluid all the way through the entire system while bleeding it, so it should last a while.

Details on the Wilwood install cut and pasted from my thread in the Maverick Forum:

Things I have found out are stock rod fits same as stock m/c.

Front reservoir is on the front, not the back like stock m/c.

My stock replacement m/c has two different sized outlet holes, and it appears that the front hole is metric? Maybe? We couldn't find a match at NAPA. But the two fittings on the Wilwood match up to the larger one on the stock line, and a new line that has the same sized fittings on both ends, the smaller one that fits the proportion block (I think that is what that thing is--where the lines go immediately after leaving the m/c and where the steel lines to all the wheels start).

Since the holes are swapped, I am going to buy new lines and bend them to fit, so I don't have such a mess of twists and curves. The stock lines are like 18 inches long and there is only 6" between the m/c outlets and the prop valve. So 2 8" lines or similar should do the trick.

Oh, yeah. I almost forgot. I just bought a billet aluminum grill to replace the crappy plastic ones that came from the factory. I should have it before I go back to work (on vacation til Jan 4th).

For Christmas, I bought myself a billet grill and installed it. Pictures will appear when the weather gets better, I don't have a sinus infection, and I can get it out in the sunlight to do it justice. Shipped from Charlie Yan in CA for $179 billetart@yahoo.com

Then my brother hinted to me that I need to add nitrous to my setup after my dyno runs. Then he emails me just before Christmas and says, keep an eye out on FedEx. Nothing shows up, and he keeps hinting "I don't need anything in return, but I want you to make a video of the first time you "hit the button."" So I am pretty sure he is going to get me a Sneaky Pete 50 HP shot. Well, nothing shows up in the mail, and I tell him to check the tracking number. It is listed as "delivered to doorstep" on 12/22. He gets pretty upset and immediately emails Amazon, through which he bought the kit, and they send a second one out overnight. I check out the tracking number and find that they delivered it 4 doors up the street, and bring it home and find this... 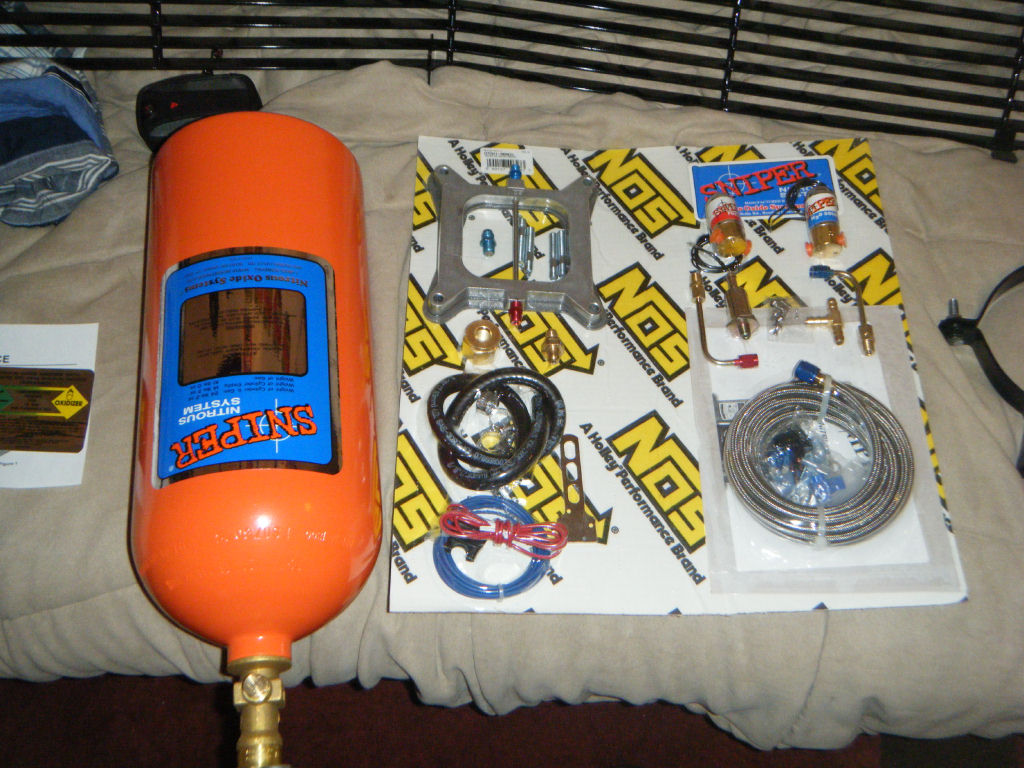 This happens to be a nitrous kit capable of giving me a 100-125-150 HP shot! He did some research, I bet, because the blocks split around 500 hp, and this is going to put me just under the 500 HP mark if I hit it with all the 150 shot. So he found the PERFECT setup for my car to get me right to where this engine can handle it.

Haven't had a chance to install it yet, but soon...