1/5/2006--I burnt through spark plug boots on cylinders #6 & #7 before I put in the doubled-up header gaskets for space, and had to order new HEI Distributor boots to replace them. Also bought two fiberglass covers to go over those two boots, since they seem to be the ones closest to the headers (20.56). Also, since I was placing a JEGS order, I got the high-flow 160 degree thermostat. Took both headers off, put a new header gasket on the passenger side and closed up that leak. Swapped the two boots, slid on the covers, reinstalled, and running great again. Topped off the water with a fresh gallon of 50/50 Prestone. JEGS bill was 47.97.

1/16/2006--Took the valve body out of the transmission for a little work. Found a website through the Forum describing a "home-made" shift kit modification...basically taking the valve body plate and cutting some larger holes in it, removing a couple of ball-valves, and switching another valve around backwards so that more fluid can be pushed through the valve body for quicker and firmer shifts. http://www.burly4x4.com/c4/c4buildup/stage4.htm has the details that I followed for this modification.

Also, replaced that leaking seal at the shift linkage. Finally.

I will have to fill the transmission back up tomorrow, adjust the shifting linkage so that the shifter in engaged in all gears, then test drive...

1/17/2006--Filled it up, and drove it around, but it slips like crazy between 2nd and 3rd gears. Acts like it goes into neutral before engaging in 3rd, and revs up like it is in neutral. Did a little research and found that I put the accumulator valve in backwards. It was supposed to go back in the same direction as before, but spring first. Will drop the fluid, swap that valve around, and refill and try again.

1/20/2006--Took the valvebody back apart, checked it all out, and it was assembled as instructed. Put it back in, refilled with more fresh fluid. It now has had three fluid changes in 3 years, two in one week, plus about 3 new quarts added while it was leaking over the years, so the fluid has to be 95% all new. Then I adjusted the intermediate band, which took about 2-3 full turns to get snug, so there is some wear there. Backed it off only 1 turn. 1.5-1.75 is specs, I am keeping it a little tighter. It ran much better. Still a tiny bit of flare after 2nd gear, but none at low RPMs and yet I can shift to 3rd with it floored and RPMs only shoot up about 300-400. Just a split second of slip before 3rd grabs.

Shifts are a bit firmer. After a half hour of hard driving, my neck was sore from my head being jerked back going into 2nd. That is one hard shift. 2nd to 3rd is a bit softer due to the flare. Might be able to tighten that band some more, but I am afraid it will wear the transmission out too quickly. I am already looking into a rebuild and new torque converter, so I can be safe and effective up to 500HP. Just asking around for the right parts, then find someone to the the rebuild for me. I don't want to do this one myself. Transmissions and paint are not my forte. I recognize my weaknesses and limits.

Also, bought a 30psi low pressure Acetylene gauge for the fuel system so I can keep track of the fuel pressures while driving. Just to make sure that I am not losing pressure at higher RPMs. Ran the fuel line up from the fuel pump, near the power steering pump, under the Monte Carlo bar, then a T and out the back of the hood and mounted the gauge on the vents in front of the windshield wiper. Then out the other end of the T behind the intake and into the carb. It ran idle up to 2000 RPM (in neutral in the garage) holding a pretty steady 6psi, where it is supposed to be. It started to rain so I never got to put it to the real test, 5000 RPM under full load.

1/28/2006--Got the 195/60r15s off the car, and put on 215/60r15s. I like the fuller fit in the wheelwell, but these are very close to maxed out in size. When I get new, I am not sure if I will go wider with lower profile, maybe 225/55, or keep this size. The edge of the tire just barely clears the fender on the front bottom edge. But I picked up another inch or two to clear my headers and exhaust cutouts, which is a good thing. In the process of having the used tires installed, two of the lug studs galled and I had to take the brake disk off. Decided to replace all the studs, and bought a couple extras for replacements in the future. 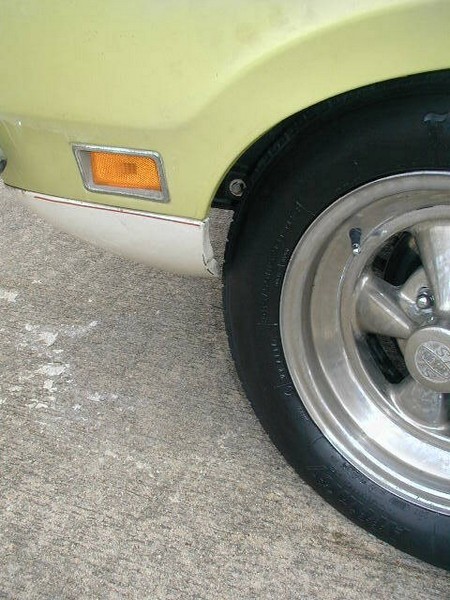