11/1/2005--Had to make a socket tool to fit over the smaller spark plugs and under the headers. Got some advice from Barry McDaniel from the forum. I started with a deep 5/8" 3/8 drive spark plug socket, then cut it down and cut a window in it so it would slide over the plugs from the side. Also had to drill out the top so the plug body would extend out through it. This thing rides really low close to the plug base, and is tightened and loosened with a wrench. 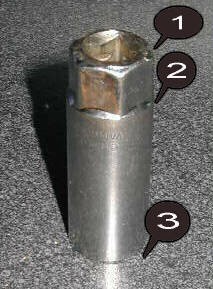 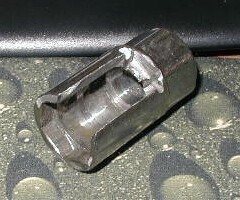 Got the plugs all tightened down, and just need the 90* HEI distributor boots (will replace the plug boots for the tight clearance under the headers) to come in, probably tomorrow, then ready to run. Will need to rinse out the engine block with clean water then put in new coolant. Also need to top off the transmission, since it is leaking really bad around the shifter seals.

11/2/2005--My plug boots got in today, so I cut the plug wires and installed them. They still touch, or are very close to touching, the headers at cylinders 6 & 7. But I ran it for an hour or so and did not see or smell any burning. Maybe after a good run on the highway... I will have to keep an eye on it.

The car did not want to start when I got it all back together, no spit and sputter or anything. I pulled #1 spark plug and turned it over, and it had a beautiful thick bright spark. I assumed the timing was off. Put a rod in the plug hole, found TDC, and found that I installed the distributor one spark plug off. Rotated it to point at #1, turned the key and it lit right up! Even rotating as slow as it was, due to the battery being very low after sitting for 2 months.

AND, it sounded like a DRAG CAR, since it has no mufflers on it, just straight out the headers. Had a nice low lope, also, which it did not have with the previous configuration. I wonder if my cam was too big for the old heads and/or the old intake to handle...? Even though it is a fairly mild cam.

Have an appointment to have a chunk of 3" diameter pipe hooked up between the headers and the sidepipes. It will have to be a fairly sharp S, since the headers extend out past the front of the sidepipes. Craig said he could do it, so it goes on tomorrow (11/4, I am writing this on 11/3). Drove it around the block a few times, and it sounds great, and has quite a bit more response than it used to have. If you accidentally put your foot on it too hard, it will lurch forward quite abruptly. I like that...

The headers have a 3" outlet, sidepipes have a 3" outlet, but a 2" inlet. I refuse to restrict my exhaust in the middle that much. Maybe 2-1/2", but I think it will sound better and run better with open 3" all the way out. Even with the S-bend in it.

Below, you can see the spark plug placement on the P heads. No restriction on the passenger side, but the tips of the plugs hit RIGHT ON the header tubes. 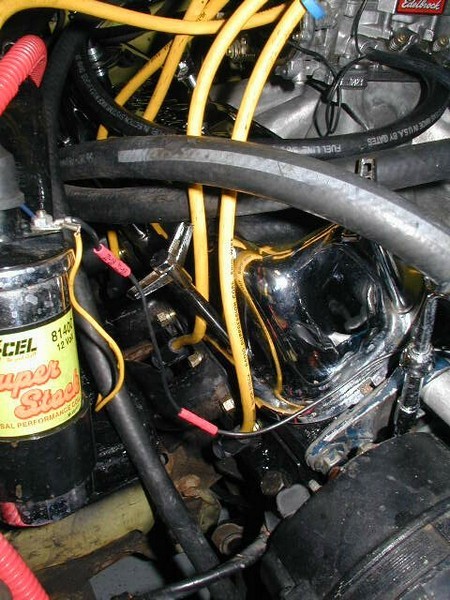 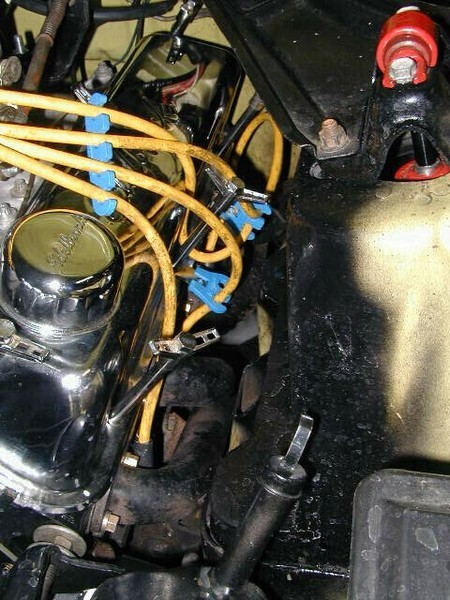 11/4/2005--I went in to Craig's and put the car on the lift...he said there was no way he was going to get any decent sized pipe to bend enough to go from the headers to the side pipes. We discussed all kinds of options, but the best one was to lose the sidepipes and go with 24" glasspaks. He feels that necking down to 2-1/2" pipe would be better on the dyno and on the track, and would sound better on the road. I figure I will put an exhaust cutout just between the glasspaks and the headers, so I can go to the track and take the cover off, and have straight headers without the mufflers. Then, after racing, put the cover back on and drive home legally. It would also serve to show off to others how the car sounds with open headers. I have a week to decide how to have the pipes exit the car. I am leaning toward exiting just in front of the rear tires, but all the guys on the Maverick forum say exit out the back of the car. I don't really like that look, too much like my truck. I don't know yet...

Since the side pipes are off, I cut the hanging brackets off, then took the shackles off and cut them down to 3" (from approximately 5-6") to bring the rear of the car back down to normal height. I will need to get rid of the air shocks next, and put in standard shocks, possibly dropping me another inch or 2.

11/12/2005--Got my 3" in/out exhaust cutouts ("dumps") in, and had an appointment to get them installed with the new exhaust system. Craig had to reschedule due to family emergency, so still driving around town with exhaust parts in my car and open headers. Will try to get them installed on Monday.

11/14/2005--I am literally scared to drive this right now! I still have the shakes, 20 minutes later! I got the exhaust installed, 2-24" glasspacks with 2-1/2" pipe coming out in front of the rear tires. I got onto the road and went to a red light on the outskirts of town, and dropped her into first. Light went green and I was 5000 RPM within 2-3 seconds and 2nd lifted the front of the car again (not off the ground, but the front end got really light!). My speedo said 80 within what seemed like about 5-6 seconds. Of course, I am completely amped and time might have been "relative"--I doubt seriously that it is THAT fast... Won't know for sure until I get it back on the track and compare numbers.

Regardless, this is by far the fastest car I have ever driven, and it roars like a lion with the glasspacks. Still have the ability to dump the exhaust to open headers at the track. I can't imagine how that will improve the acceleration!

I need to stop working on her for a while...getting low on funds. Need to do small stuff, like new shocks, install seat brackets, etc.

11/17/2005--I took the mav for a good hard drive yesterday, and then quickly got home and pulled the #1 plug, and it still appears to be running lean. So, since I bought the Edelbrock Calibration kit a few weeks back, decided to use it. I swapped out the metering rod to the next richer, and ran the car today, and the plugs went from all white to mostly a grayish-tan color, much more like what it is supposed to look like.  Also, it appears that the engine is running about 10 degrees cooler, stopping at 190 F.

Also today, I dropped the oil, since it was supposed to be run for a short time just to clean out the metal dust from the engine after the work I recently completed. It was really nasty looking, for oil that had only been run for approximately 30 miles and maybe 5 hours. This time, I bought 4 qts of Castrol GTX 10W-30, my standard oil, and added the last quart of Lucas Oil. It was really thick, making STP look like water. It is supposed to increase oil pressure, stick to moving parts after the motor is shut off, seal off worn seals and rings, etc. From what I can see, it is increasing my pressure, double at idle and about 10-20 psi at running speeds. Hopefully, it performs all those other functions as well. Most drag racers swear by this stuff.

11/27/2005--I put out a "parts wanted" on the forum for a passenger door and front fender. A guy in San Antonio found a 71 Comet in a junk yard, and told me he needed driver side stuff, and told me where it was and gave me a phone number. He e-mailed me pictures of the car and parts. I called Al's Auto Parts and verified that there was no rust. Then Anna and I took the truck for a one-day round trip to San Antonio for the parts. They were pretty straight, much better than the parts I am replacing. Ugly looking, but will be just fine after painted to match. 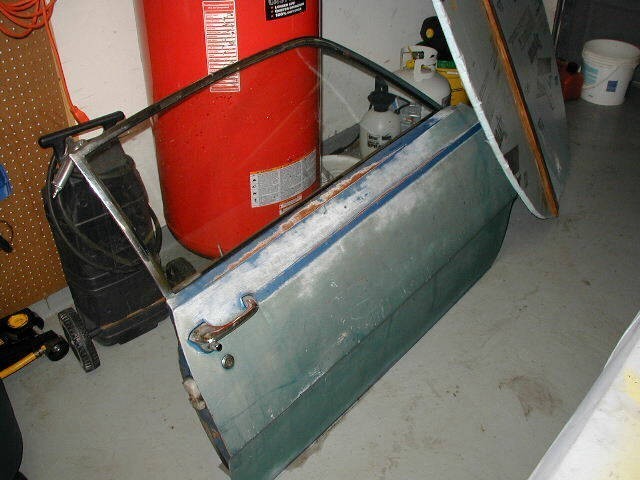 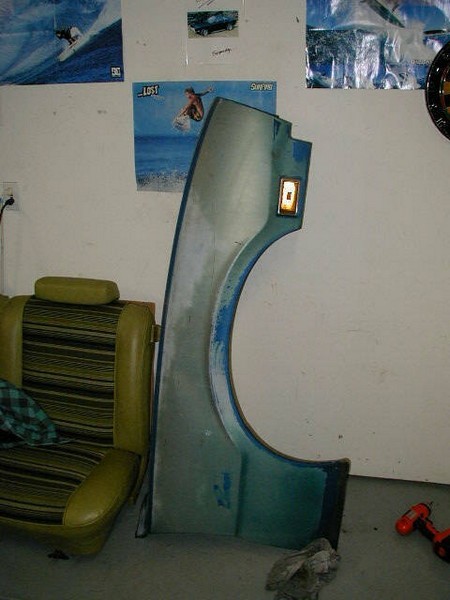 Today, I decided that I am putting prices on this website for every little nut, bolt, and can of spray paint. Also, there have been parts removed and put on the For Sale page, and all of these costs need to be removed from the total cost of the car. I left the numbers on the previous pages, but will subtract a total of 992.19 to recover costs of antifreeze, adhesive removers, clamps, hoses, and other items that should not be reflected in the total.

This is probably all the work for this month. Will calculate and begin December page.