9/7/2005--Ordered a set of used Hooker 6901 (on 9/5) off of e-Bay. The guy says they still have paint on them, he used them for only a year. The only damage they have is the ding where the steering hits them on far left turn, which is common for power-steering mavericks. $70 buy-it-now, with $15 shipping. He e-mailed and said I got a good deal on his shipping quote, as he had to eat $11.

Still debating on if I want to have the heads milled down .025 or not, prior to installing them. I can always do this later, and I don't feel like Anna is accepting all the money I have been spending on these heads/headers, and all that goes with them. I might save the $90 right now, and just install them without machine work. The valves seem straight and tight, so there should be no missing. I will still have to buy gaskets, header wrap, $100 worth of shorty plugs, new 90-degree spark plug boots, a power-steering drop-down bracket, a reducer, and then pay for Craig to weld these up to my sidepipes, if they will fit. It will be one of the more expensive projects, once completed, but likely the most power-productive of all, minus a complete rebuild of the motor.

9/10/05--I think I am getting serious, now. I have the stock heads off, and block is cleaned up. The GT40P heads are cleaned and painted. I decided against messing with the machining at this time, since my 8:1 compression wouldn't be helped that much. I will just wait until I can do an engine rebuild and get my 11:1 legitimately.

Headers were supposed to come in yesterday, but they got hung up in Houston by a late train, and will not get here until Monday.

I won a new intake on e-Bay tonight. It is an Edelbrock Torker 289. Supposed to be one of the best, but they quit making it a few years back and made the Torker II. The II model ended up being crap after they remodeled it to fit under the hood with more clearance and straightened out the carb (the carb sits twisted at a 20 degree angle on the original Torker). The one on e-Bay was also ported to further increase flow. I started bidding on it at $40. There were two others on there at the same time at $130 and $140. They sold new for around $200-250, I think. I immediately bid $60 and kept an eye on it. It had 1-1/2 days left on a 5 day listing. At the last 20 minutes, someone started bidding it up $5 at a time. It approached my $60 within the last 2 minutes, so I quickly bumped it up to $80 and got back to the page with only 30 seconds left. Still going up, so I refreshed at 20 seconds, then 9 seconds, and 1 second left...the other guy beat my original $60 bid with $63 so I got it at that price. Just $3 over my original bid! Now, e-Bay's site is messed up and I cannot pay for it, so I have e-mailed the seller to arrange payment, and sent a request to e-Bay to fix the PAY NOW button. Total is $78.22 shipped.

Bought two new head gaskets (34.62 including tax). The heads are sitting on the block, but not bolted on. I am waiting to see how the headers fit and if I will need to use the Shorty Accel plugs, before I install everything. I also removed the side pipes so that the headers will go in without hitting them. I will take the side pipes to Craig in the truck so he can cut the chunk off the front that went to the old exhaust manifold. Then I can drive the car there, and he can put the pipes back on and run a line from the headers. I called Craig up and he said that depending on how far back the long tubes go, he could easily set up the side pipes for about $60.

Another job completed, that I had been putting off for a while, is removing all the linkage to the column shifter. After taking off the heads and all the exhaust piping, I could get in there with the dremel and cutting wheel, and unbolt the plate that holds the bottom half down, and the bolt in the block that holds he last link before it heads to the transmission. I am guessing that last link is the one in the way, but getting it all out was a needed improvement.

Also, before I put this all back together, I think I will notch the shock towers. With the heads and exhaust out, I think there is plenty of room to cut the towers and get in there with a welder. I will have to find someone with a welder, or make that $200 investment in one myself. I think I can cut it with a die grinder and the disks I have. It will take a while, but should be a nice clean cut. This project will give me 2" extra clearance around the headers and spark plugs, so I can more easily change the plugs. I will likely have to loosen the headers to swap plugs, due to the new head's plug angle, so any extra room will be desperately needed. Of course, this extra work will keep the car off the road for quite a while, since there will be no heads, headers, and weak suspension until it is all done. I have been needing to do it for a while. The maverick forum is currently not working, but when it comes back up, I can get the notch dimensions and decide if that is what I need to do right now, and verify that it can be done with the block in the car. It seems like there is plenty of room, but I will measure before making any decisions to cut. 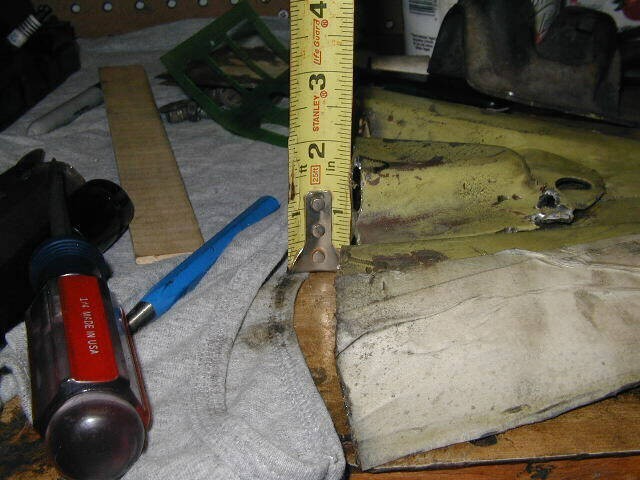 I think I could cut some more, but might want to be conservative. 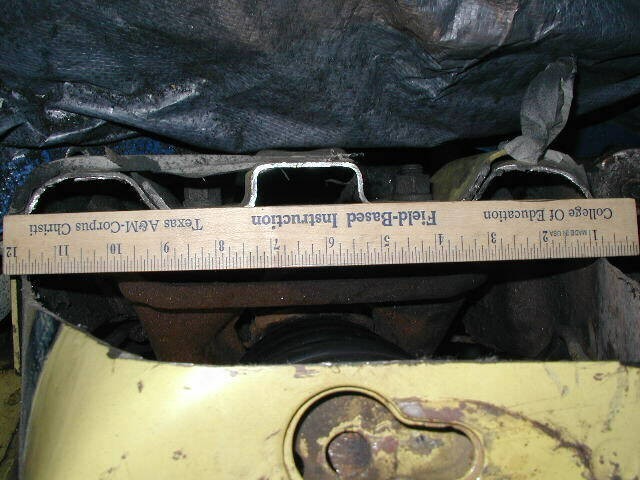 It looks like I can take more off, but I am afraid to take too much off. I will drop the front end back to the ground, check the clearance, and cut some more if I think I can get away with it. I want to clear as much space inside the engine compartment as I can. This space will be useful for headers, spark plug clearance, and larger engines in the future.

I can get a rental Wire-Feed welder from Home Depot for $36 for 24 hours. Beats buying one, as I only have one or two project requiring a welder. If I get to where I am needing one more often, I can get one for $250 that can weld up to 1/4" plate steel.

9/12/05--I dropped the front end down, and found that I can take more off. I cut more off the driver side, then cut the passenger side. I now have almost 3" clearance on both sides.

Got my headers in today. They are in very good shape. Still have the original black paint, and just a little soot inside. Whoever owned them before mentioned that there were indentations where the steering hit them. Well, the indentations are there, but you can tell he beat the hell out of them with a hammer to make the clearance. Not too much of an indentation, so I am happy with them. Might have to rent a welder this weekend, if I can find some scrap metal plate...

LATE ENTRY (12/7/09--I forgot to outline how to get the headers in and out, and chachie (Justin Fetherolf) on the Maverick Forum was the first one to list out all the steps, so I want to add it here and give him credit for what I should have done back in 2005...)

1)Remove air cleaner assembly
2)Remove the shock tower braces
3)Pull spark plug wires
4)Remove spark plugs (may not be needed but sure gives you some extra clearance)
5)Remove both exhaust manifolds, I found it easiest to remove the driver's side from the top and the passengers side from the bottom.
6)Make sure old gaskets are removed
7)I had the car jacked up about 18-24" and on jack stands
8)on the drivers side, under the car, unbolt the power steering assist ram
9)I had to disconnect my neutral safety switch from the trans and steering column
10)You should now be able to slide the drivers side header in from underneath the car
11)The way i made sure everything was lined up was i put the rear most bolt through the gasket and threaded it in a couple threads, then do the same for the front most bolt, this way you can check all of your clearances before tightening everything down.
12)The passenger side was a little more tricky for me.
13)Unbolt the two bolts going through the frame holding the steering bar on, on the passengers side. (again, this may not be necessary but it gave me much more clearance.)
14)Unbolt the 4 engine mount bolts, 2 on each side of the engine.
15)Using about 3 pieces of 2x4(i used 3 pieces of 2x8 for more stability), use a floor jack to jack the engine up, making sure to watch the fan shroud. I had to jack mine up about 6 inches.
16)Begin to wiggle the passenger side header into place.
17)About halfway through this, you will need to lower the engine back down slowly until you get the perfect alignment.
18)Use the same procedure for the passenger side as you did the drivers for bolting the header to the head.
19)Reconnect everything you disconnected and you should be done.

9/16/05--Bought 2 sets of 6-cylinder header bolts (21.62). Don't know why they sold them in sets for 6-cylinders, but not for 8-cylinders. Have a few left over in case of...whatever. Also, found a local place that sells steel. Got 28" of 3/16"X12" plate (32.38). I need just under 12" for each tower, but figured a little extra might come in handy, just in case. Bought two metal-cutting disks that fit on circular saw. I am not sure, at this point, if I will eat through both, but at $3 a piece, it saves me from having to clean up, put on clean clothes, and drive back to the hardware store. I need some cardboard to make the patterns, then maybe next weekend, or Sunday this weekend, if I get that far, I will rent that welder. Would like to get the heads back on, even without the headers, before the next two weekends, as I am being sent to Guam on 10/2 for two weeks (with a 3-day weekend in Hawaii on the way back!) and don't want the cylinder walls and valve lifters exposed to air for that long. I went ahead and gooped them down with motor oil just in case I can't get the heads on before then.

I struggled with the decision to get 3/16" plate over 1/8". The guys on the Forum were suggesting that 1/8 was fine, but some went up to 3/8". Since I cut a bit more off then most, I decided that, upon inspection of the steel, 1/8 looked too thin and flimsy, and I want the plates to perform at least some support under load. So, 3/16 it is! It will be a bit harder to cut, and maybe harder to weld, but I didn't want to do all this work with too flimsy material, and have the shock tower collapse onto my engine first time I take a turn.